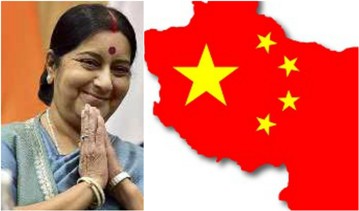 Editor-in-Chief of indiacommentary.com. Current Affairs analyst and political commentator. Writes for a number of publications. View all posts by this Author
India is moving with the speed of light to isolate Pakistan and ensure that the international community comes around to the Indian position that the air strikes inside Pakistan were not an act of aggression but a pre-emptive, non-military operation to destroy terrorist camps. Even as this is being written, Minister of External Affairs, Sushma Swaraj, has left for China to attend the trilateral meeting between India, China and Russia. Although this meeting was scheduled much earlier, it assumes great significance due to recent developments. Before that, she had spoken to the foreign ministers of almost all major countries including the US, Russia, UK, Australia, China, Bangladesh and Afghanistan to explain Indias position.

The visit to China comes at an excellent time. Of late, China has been Pakistans biggest supporter. Ignoring the fact that India does huge trade with it where the balance is always in Chinas favour, the Chinese have made strategic investments in Pakistan and have continuously used their veto to protect Masood Azhar. China is following the maxim that an enemys enemy is a friend to support Pakistan, both financially and diplomatically. Hence it is necessary and urgent for India to explain its position to the Chinese and ensure they maintain neutrality if there is war between India and Pakistan.

Although it is going to be a difficult task to convince the Chinese, it is not impossible. It will be difficult because given Chinas hostility towards India, especially regarding territories in the North-East and Kashmir, the Chinese are unlikely to support the Indian stand. Then there is the question of trade  the Chinese are wary of yielding positions to India in world trade, especially as their economy is showing visible signs of slowing down while India, despite disruptions, has steadied the ship and is growing at a smart, if not galloping, rate. But India can impress upon them that terrorism is slowly raising its ugly head in China too, with the Xinxiang province rocked by Uyghur ultras. It can show the Chinese that although it is small now, with support from terror factories in Pakistan, the Uyghur movement might snowball into a major crisis for the country. It can also hint that India will place with a complete ban on imports from that country in case it chooses to actively support Pakistan in case of war.

India has taken its step. Pakistan is going to retaliate. Hence it is necessary for India to take all necessary diplomatic measures to ensure that world opinion and support is in Indias favour. Since India did not bomb any military or civilian targets in Pakistan, this strike cannot officially be called an act of aggression against that country. But when one listened to speakers in the Pakistani National Assembly (as shown on some Indian TV channels), it was clear that they were aggrieved that India crossed the LoC to strike deep in Pakistani territory and wanted their government to act. Isnt it better for them to look for the cause of why India struck and ask their government to immediately dismantle the terrorist infrastructure that exists on Pakistani soil? But that will never happen, for, with apologies to supporters of Pakistan like Mehbooba Mufti and Navjot Sidhu, whichever government comes to power in Pakistan, the foreign policy will always be guided and dictated by the Army which will never stop its proxy war against India. For that, brainwashed terrorists are needed and hence the terror camps will continue to exist in Pakistan.