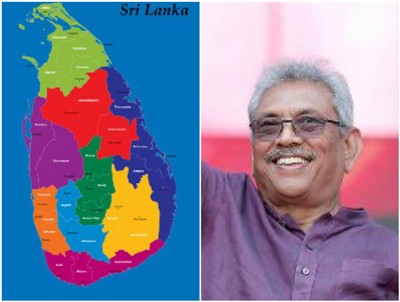 People in Sri Lanka have ostensibly voted for national security. But in doing so, they have shown that the country has become highly polarized. Although Gotabaya Rajapaksa is the clear winner, he has won on the back of the consolidation of the Sinhalese-Buddhist votes. Preliminary data shows that Tamils and Muslims have not voted for his party. This will make Sri Lanka ethnically and religiously divided and unstable and that will not be in India's interest.

The Rajapaksa family has a history of being highhanded. When Mahinda Rajapaksa was president in 2007, he allowed his brother Gotabaya to crush the Tamil insurgency. But in the process, whispers of cruelty and war crimes committed against the Tamils were heard and these were never addressed.

But it seems that in the aftermath of the IS-sponsored suicide bombing in the island's churches and hotels that left hundreds dead, people in Sri Lanka, at least the Sinhalese-Buddhist majority, decided that it was time to bring back the Rajapaksas. It was clear that the Rajapaksas will come back when they swept the local body elections in the country in 2018 and when the bombers struck in Easter this year, the weak "national unity government" that replaced Mahinda Rajapaksa in 2015 stood no chance. Most Sri Lankans believe that President Maithripala Sirisena and Prime Minister Ranil Wickremesinghe compromised national security and were not able to prevent the attacks through their bad policies.

India will need to quickly alter its policies vis-a-vis Sri Lanka as the Rajapaksas always tilted towards China in the past. Although Gotabaya Rajapaksa would not like to antagonize India, he will still prefer doing business with the Chinese. Given China's interest in controlling the oceans, any foothold it establishes in Sri Lanka will compromise India's security. Hence, India will have to move fast and ensure that the new government in the island nation does not grant any military favours to China.