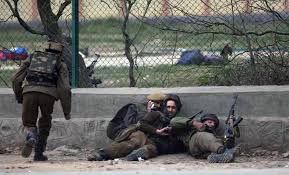 Editor-in-Chief of indiacommentary.com. Current Affairs analyst and political commentator. Writes for a number of publications. View all posts by this Author
The cycle of terror attacks on India as soon as some effort is made to engage Pakistan in peace talks has repeated itself with the attack on Pathankot Air Force base. We had Kargil in the past after Vajpayeeâs much flaunted Lahore yatra. We had hosted Gen Pervez Musharaf in Agra, only to be âgiftedâ with an attack on the J & K Assembly. But this time, one feels that the attack could have been avoided had the Indian security agencies been more alert and up to the job. This attack is more a failure of our security apparatus then it is a success of the terrorists.

Alarm bells should have started ringing when the Punjab SP was kidnapped and released. There were reports of unidentified people roaming about in army fatigues. The SPâs role is also under the scanner. Intelligence reports had warned of terror attacks. Earlier, the terrorists had opened a new attack route when they had attacked Dina-Nagar police station in Gurdaspur. Also, past experience had showed that terrorists attacked when talks were in the pipeline. Hence, it is very surprising, as well as disconcerting, that the terrorists managed to sneak into the high security air base despite so many red flags.

India has conveyed to its Pakistani counterparts its findings on the issue. It has handed over the list of telephone numbers recovered from the dead terroristsâ phones. It has also identified several handlers. The dead terrorists were carrying prescription drugs made in Pakistan, which was a dead giveaway that they had entered India illegally. Couple this with the celebratory mode within Jaish E Mohammad and the Masood Azhar audio tape that hassurfaced after the attack and the picture is complete. These were no non-state actors that Pakistan so defiantly claims every time terrorists attack India. They were insurgents backed by Jaish and trained, aided and abetted by the ISI.

It is heartening to note that the Pakistani PM Nawaz Sharif has held a series of meetings with his countryâs security top brass. Even the generals had attended one of the meetings. In the end, Sharif has ordered a probe into the incident relying basically on the evidence supplied by India. It is difficult to predict what will come out of the investigation, but it is a step in the right direction. It will at least ensure that the forthcoming talks on January 15th are not scuttled.

India, on its part, should not refuse to talk. For, it will be playing into the hands of the terror groups and it will also undo all the hard work PM Modi has done in the recent past to bring back the two countries to the negotiating table. Talks should go ahead as scheduled, perhaps with an added agenda of discussing why Pathankot happened and why Pakistani security agencies were unable to prevent it.

It is very easy to say that the democratically elected Pakistani government has very little power and the real power vests with the Army and its nefarious progeny, the ISI and by that token it is easy to say that talks serve little purpose. But does not talking and taking a hard line serve any purpose? India has to talk with everyone on the Pakistani side and at all levels. If the generals control the country, talk to the generals too. Pakistanâs proxy war against our country needs to end and for that India must explore all avenues, including talking.

The Pakistani generals have a single point of agenda of sabotaging the dialogue process. Since we know that, it is upon us to counter that with finesse. After all, that is what diplomacy is all about. As the US puts pressure on India to talk to Pakistan to resolve bilateral issues, so should India put pressure on the US to stop military aid in the name of counter terrorism which is in effect used to aid terror against India. If India manages to do this, the generals will lose much of their power.