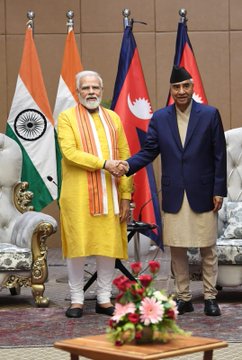 Once upon a time, India did have a rock solid relationship with Nepal, or as Prime Minister Modi put it during his day-long visit to the neighbouring country today on the occasion of Buddha Purmina, that the relations between the two countries are "unshakeable, like the Himalayas". But ever since China discovered the valleys through the mountain range which allowed it to enter Nepal, a lot of dissatisfaction has crept in on both sides. It is against this background that Prime Minister Modi's visit to Nepal, a month after Nepalese Prime Minister Sher Bahadur Deuba's India visit, must be viewed.

Two things clearly showed how far behind India had fallen in its relations with Nepal. Prime Minister Modi chose to reach Lumbini (the birth place of Lord Buddha) in a helicopter, landing at a newly-built helipad and clearly avoiding the swank, new Gautam Buddha International Airport that has been built with a soft loan from China and which was inaugurated earlier the same day by Prime Minister Deuba. Then, Modi laid the foundation stone of India International Centre for Buddhist Culture and Heritage years after many frontline nations have already built their centres in Lumbini.

Modi did sign several important MoUs, including one to build a 490MW hydro-electric project in Nepal, but the reset in relations has to get better than this as several past differences, including the one over the new Nepal map showing territories in India as its own, need to be set right by continued negotiations at the appropriate level. India needs to have excellent relations with Nepal for security reasons also as it will help in countering China's expansionist designs. Both nations are very close culturally but the Nepalese have started leaning towards China due mainly its money power. India needs to counter that by extending help in all other areas and making the relations unshakeable again.