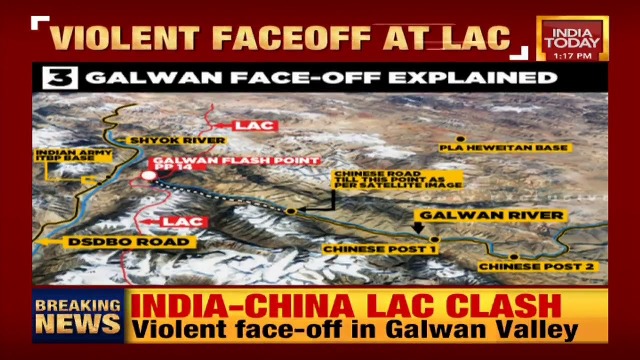 Indian And Chinese Troops Engage In Hand-To-Hand Combat At Galwan Valley, Casualties Reported On Both Sides

Indian And Chinese Troops Engage In Hand-To-Hand Combat At Galwan Valley, Casualties Reported On Both Sides

The news of action at the LAC at Galwan Valley and casualties on both Indian and Chinese sides is alarming. When it was being assumed that the two countries were engaged in talks and the troops were disengaging, news of this escalation was a bolt from the blue. A Colonel and eighteen jawans were reportedly killed on the Indian side. Exact casualties on the Chinese side have not been confirmed. Scores have been grievously injured and death counts could rise. It was reported that the men were killed in hand-to-hand combat involving batons and stones and not from gunshots. Both sides have put out statements blaming the other for trying to cross the LAC and change the status quo. This, they said, had led to the clashes.

India said that "a violence face-off happened as a result of an attempt by the Chinese side to unilaterally change the status quo there. Both sides suffered casualties that could have been avoided had the agreement at the higher level been scrupulously followed by the Chinese side." Chinese foreign minister Wang Yi said that "Indian troops on Monday seriously violated consensus of the two sides by illegally crossing the border twice and carrying out provocative attacks on Chinese soldiers, resulting in serious physical clashes."  These statements are along expected lines as each side will obviously try to put the blame on the other, but it is surprising that such a clash could happen despite the on-going negotiations to de-escalate the stand-off.

It is being reported that the commanders of both sides met after the clash to cool tempers and possibly ensure that a repeat did not happen. It must be recognized by both sides that the face-off is like a tinderbox. A small spark like this is all that needed to ignite it. Neither India nor China can allow the situation to escalate. Hence, both sides need to drill some sense in the heads of their ground troops and frontline commanders. Troops from both sides have to respect decisions taken at higher levels and give peace a chance.