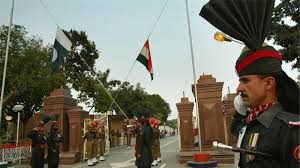 Indo-Pak Dispute: Needed a Dedicated Ministry in Both Countries

Indo-Pak Dispute: Needed a Dedicated Ministry in Both Countries

Editor-in-Chief of indiacommentary.com. Current Affairs analyst and political commentator. Writes for a number of publications. View all posts by this Author
Pakistani media has reported that its government has arrested chief of Jaish E Mohammad, Masood Azhar, his brother and other three Jaish terrorists and sealed the offices of the banned organization in its operation against the terror group in the wake of evidence supplied by India in the Pathankot attack case. It has also decided to send a special investigation team to India to collect evidence to help in further investigating the case. Earlier, it had formed a six member Joint Investigating Team (JIT). But since the news of Azharâs arrest was not officially confirmed by the Pakistani government, India has deferred the foreign secretary level talks that were to be held in Islamabad on the 15th of January.

As the talks have not been cancelled but only deferred, the Indian government cannot be faulted on this decision. It is clear that the Pakistani side needs to come up with something special this time, as India has been quick to send across the evidence. Further, the Indians are not going to be fooled by tokenism now as they have twice before (after the attack on the Indian Parliament and the Mumbai blasts) seen Pakistan reject evidence supplied by them. Also, this time the US administration is putting immense pressure on the Pakistanis to act against the culprits.

It is strange that the Jaish E Mohammad still has offices that run and its top leadership is allowed to function unhindered. For, the organization is officially banned in Pakistan. This is one more proof of Pakistanâs kid gloves policy against terror groups who target India. Pakistan is following the policy of âgoodâ and âbadâ terrorists to the hilt. Groups that targets India are considered good terrorists and they are allowed to function freely, given training and financial and logistical support. No one can cross over to India from the Pakistani side without the knowledge and full support of the units that man the international border. Pakistanâs complicity in the proxy terror war against India is visible to all, but most nations chose to see it as a problem between the two countries and do not consider it fit to include it in the global war against terrorism.

But after the Pathankot attack, India has to be stricter with Pakistan. The cycle of terror attacks on India every time there is hope of the two countries engaging in negotiations has to stop. The Pakistanis have to drill it into the heads of the terror groups, over whom they have considerable influence, that they should not vitiate the atmosphere. It is here that doubts start creeping in. Is the Pakistanâs democratically elected government in control of things? Or does Pakistani Army and the ISI act independently? Or have the terror groups become mad bulls? One feels that it is a combination of all three in parts that is letting the terror industry flourish in Pakistan and results in frequent attacks on India.

Let us take the terror groups first. Their very existence will be threatened if Pakistan talks to India and if something concrete comes out of it. Maybe nothing as substantive as a solution to the Kashmir problem, but even a trade pact, a cultural pact or a cooperation of any matter will mean that Pakistan will have to reduce its support to such groups. Hence, these groups will never want talks to happen, let alone be successful.

Then, if we talk about the Pakistani army and the ISI, both these organizations have a vested interest in keeping the conflict with India alive and kicking. For, the allocation for the defence budget solely depends on how they can show that the Indian might has to be countered with more sophisticated weapons. And the fear of India is what gives them their status and immense clout. The generals have become indispensible in the Pakistani scheme of things as they have been successful in creating a huge fear of India. Also, the Pakistani army (an even some in its political establishment) have not forgiven India for dismembering the nationâs eastern wing in 1971. The still seek revenge for the Bangladesh war.

As for the Pakistan government, one is at a loss to analyze its behavior. On the surface, it seems willing to talk to India. But the conditions it sometimes puts forward (like consulting Kashmiri separatists before talking to India or not allowing talks on terror to be on the agenda) seem to be designed to avoid talking. So, one can safely assume that its âwe can talkâ stance is for the consumption of Western powers, who donate billions to it in their false assumption that Pakistan will help them in their war against terrorism. As the US President has now admitted, Pakistan is the new haven for terrorists, with or without the knowledge and support of its government.

One feels that since both countries are so confused with each other, there should be a dedicated ministry on both sides to resolve issues. India should have a minister for Pakistani affairs and similarly Pakistan should have one for Indian affairs. Pakistan should drop the sham that its Indian policy is run by the government and include army generals and ISI top brass in the ministry. Both the ministers and their advisors should engage with each other on a regular basis and not let things go out of hand. They should start by picking low hanging fruits (of which there are many) in our dispute with each other and take up more complicated issues as trust builds up. It could be the beginning of what PM Modi said (during one of his campaign speeches) should be a joint war against poverty and not against each other.