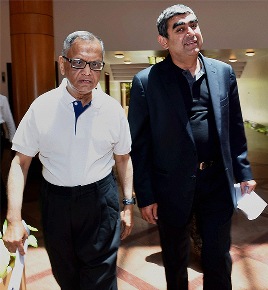 Editor-in-Chief of indiacommentary.com. Current Affairs analyst and political commentator. Writes for a number of publications. View all posts by this Author
Vishal Sikka was appointed CEO & MD of Infosys in June 2014. Commenting on his appointment then, company co-founder N R Narayan Murthy said I am pleased with the selection of Dr. Vishal Sikka as our new CEO. Vishal brings valuable experience as a leader of a large, global corporation. His illustrious track record and value system make him an ideal choice to lead Infosys.

But ever since Sikka took over, Narayan Murthy has not been pleased with his style of functioning. In any case, after having left the company and more so, having just 3.5% shareholding in the company, Narayan Murthy should not have been allowed to dictate terms to the board and the CEO. But such is his overwhelming presence in all affairs of Infosys that till recently, the board did not have the guts to tell him to mind his own business. After Sikkas resignation though, the Infosys board has gone on the offensive against Narayan Murthy, alleging that his continued use of media to deride Sikka had led to his resignation. The board has also stated clearly that they will not offer a role in company governance to its founder. It has also accused him of trying to override shareholder democracy by interfering with the remuneration of the top management even after the same was approved by a majority of shareholders.

It is a very painful decision to let go of something one creates. But once one takes the decision, assents to the appointment of the next leader and leaves all executive roles in the company, one should ideally move on. But Narayan Murthy has strong views on everything concerning Infosys, from company governance, to acquisitions and remuneration of top management. He takes an active interest in the day to day functioning of the company. No self-respecting CEO, let alone a person as experienced as Sikka, will tolerate this. Narayan Murthy fails to realize that every person has his or her own style of functioning. Apart from raising questions and demanding answers at the AGM, there is little a minority shareholder can do about those tasked with running the company unless what they are doing is illegal. Narayan Murthy stands accused of having hounded Sikka out of Infosys through his sustained and ill-advised campaign against his style of functioning, although Sikka had full support of the Infosys board. Narayan Murthy wants to run the company through proxy, but for that he would have to find a more pliant CEO. That is not possible since he does not have any say in such appointments, apart from his minority shareholders vote.

The biggest fallout of the fight between Narayan Murthy and Sikka has been the beating Infosys shares took on the bourses the day Sikka announced his resignation. The shares tumbled by almost 10% (even more intra-day). Ordinary shareholders lost more than Rs 30000 cr. Who is to blame for this? Narayan Murthy might well say that even his 3.5% stake decreased in value. But the ordinary shareholder is not concerned with how much money Narayan Murthy lost. He is just concerned about how much he lost himself.