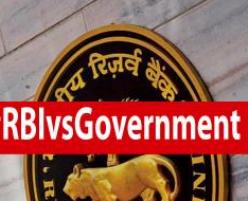 Editor-in-Chief of indiacommentary.com. Current Affairs analyst and political commentator. Writes for a number of publications. View all posts by this Author
The government has had its way. The RBI is to transfer Rs 24000cr as interim dividend for 2018-19. This is the second year in succession that the central bank is doing so. Last year the amount was just Rs 10000cr. But this year, a cash-strapped government juggling to keep its fiscal deficit target in check in the face of the demands of an election year was eyeing the ample reserves of the RBI. One thinks that it has adopted the interim dividend route to mute the criticism that surfaced when rumours were doing the round that the government wanted the RBI to part with a substantial sum of the huge reserves it has accumulated over the years.

If one sees from a purely commercial and corporate point of view, there is nothing wrong in shareholders demanding an enhanced dividend or even an interim dividend on their investment. Companies usually do this. There is also no harm in asking for unutilized reserves to be transferred. This is usually done by issuing bonus shares in the corporate world. The Centre, as the sole shareholder, is also specially empowered to give directions to the central bank vide Section 7 of the RBI Act.

But the role and function of the central bank in the economy are vastly different from that of a company in the marketplace. There are many areas where the central bank has to intervene, either to shore up the rupee or to calm the financial markets in turbulent times. With a global economic slowdown on the cards, the RBI needs the reserves. It also matters in global ratings  a central bank with ample reserves to tide over difficult times is likely to get better ratings. Finally, it never pays to undermine a financial regulatory institution for political gains. Instead of eyeing the RBI reserves, the government must either curb its financial profligacy or find other ways to raise revenue.

One feels that the government must do away with these knee-jerk responses. It must sit down with the RBI, make necessary changes in law and work out a permanent solution for transfers of dividend. Former RBI governor Bimal Jalan is heading a committee that is looking into the economic capital framework for the RBI. This committee is expected to institutionalize a system for periodic transfer of RBI surpluses to the government. The committee will definitely study the MoU signed by the Bank of England with the UK Treasury whereby the central bank will transfer 50 percent of its profits each year to the government in two installments, one as an interim dividend and the other as final. India needs a similar institutionalized system to do away with the arbitrariness and improve relations between the government and the RBI.