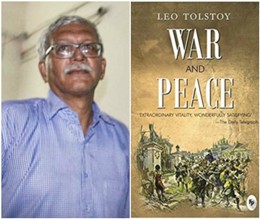 Is It A Crime To Be Well-Read?

Is It A Crime To Be Well-Read?

It is good that there were no judges like Justice Sarang Kotwal of the Bombay High Court when Leo Tolstoy wrote War and Peace about 150 years ago. Otherwise, that judge would have asked Tolstoy the reason for writing that book and would have suspected him to be an enemy of the nation.

It is extremely shameful that Justice Kotwal is not aware that War and Peace is not incendiary material but one of the greatest novels ever written. It is classic literature, taught in English courses in almost all colleges the world over and not a manual for urban Naxalites or terrorists.

The way he asked Vernon Gonsalves, an accused in the Elgar Parishad-Bhima Koregaon case, to explain why he kept "objectionable material" like the novel War and Peace at home just shows his ignorance about English literature. How can a book that is also taught in colleges in India and is allowed to be sold in the country be called "objectionable material"?

The outlook of the judge is in harmony with that of all such people who judge everything by the cover or the title without ever taking the trouble of going through the contents. In India, those who seek a ban on any work of art - be it a book, a film or a painting - do so without reading or seeing it. In any case, what books one has on one's bookshelf should not concern others as long as it is legal to purchase them in the country.

Justice Kotwal will be well advised to read War and Peace before making such comments. He will discover Tolstoy's moving description of war and the destruction it brings in its wake, his insights into human relationships as well as the relationship between nations and his ability to breathe life into fictional characters. Maybe, then, Justice Kotwal will acknowledge that being well-read is not a crime.