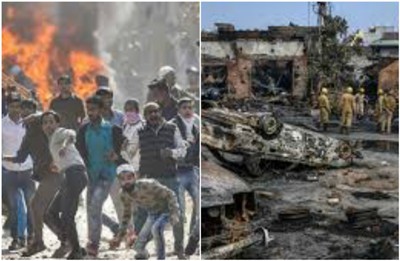 Is The Investigation Into The Delhi Riots Taking A Predetermined Route?

Is The Investigation Into The Delhi Riots Taking A Predetermined Route?

The Delhi riots case is being given an unnecessary and disgusting twist by the Delhi Police. There is a huge difference between people who take to rioting and people who protest peacefully against any government policy. By equating the two, however obliquely, the Delhi Police is trying to crush the democratic right of dissent. Seasoned politicians like Sitaram Yechury and Yogendra Yadav, economist Jayati Ghosh, professor Apoorvanand of DU or documentary film-maker Rahul Roy are not rioters. It is nothing but unprofessional conduct and political arm-twisting to mention their names as co-conspirators in the disclosure statement. Since the statement is not admissible in court, it shows that the police are trying to involve the above named citizens for no cogent reason. If it is argued that these people supported the protests against the CAA and the NRC and hence instigated the rioters (which premise itself is laughable), then why have the police not moved against Kapil Mishra and other BJP leaders whose speeches were many times more inflammatory and were more likely to instigate violence, especially when they have arrested Umar Khaled under UAPA for making a speech against the CAA that was considered to have instigated the rioters?

It is clear that the Delhi riot probe is proceeding in a predetermined way which goes against the ethics of a professional police force. Even if it is claimed that a particular community started the riots, the role of the other community in retaliating (as opposed to defending) and hence aggravating the situation, has to be examined. In the instant case, focusing on the peaceful protests against the CAA and NRC and assuming that they were the main sources of the riots is wrong. It has to be examined how the other side, which claimed that the protesters were "anti-nationals" and "traitors" and deserved to be "taught a lesson", was instrumental in fanning the flames. There will always be claims and counter-claims when an incident of this kind happens. It is the duty of a professional police force to conduct an unbiased investigation to book the culprits. Although a completely free and fair investigation is not possible in India given the political scenario (all political parties, without exception, use the police force for their devious political agenda) it is extremely unfortunate that the probe in the Delhi riot case is becoming totally one-sided.