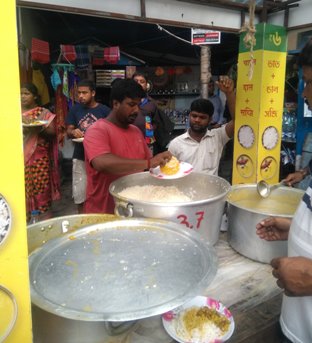 By our team of in-house writers. View all posts by this Author
Kolkata is known to be a pocket-friendly city when it comes to food. But what one saw opposite RK Mission Sishu Mangal hospital on Sarat Bose Road a few weeks back was truly amazing. A vendor was selling a full meal comprising rice, dal and sabzi at just Rs 6  yes, you read it right, just Rs 6. In a brightly-painted pushcart, he had three containers full of his wares. One helper was spooning out the three items one by one and placing them on plates. There was a steady stream of people asking for the food. The vendor is publicity shy and was averse to disclosing his name or how he managed to make profits selling at such a low price. But he made the point that his stall was not part of any government scheme and was not subsidized by anyone. It was his own venture and yes, he paid salaries to his staff and made enough profits to call his venture a success.

We asked one of the students who was having his lunch there about the quality of the food. He was categorical in saying that the food quality was excellent given the rate. As for the portions, he was of the opinion that if one had low appetite, one helping was filling enough but if one ate more, two helpings were more than enough to satisfy the hunger of almost anyone. We asked others and most were of the same opinion.

There are other low-cost meals served in various cities. There are Amma Canteens in Tamil Nadu which serve a

government-subsidized meal at Rs 6 to Rs 10.

Bengaluru has the copycat Indira Canteens

that serve breakfast, lunch and dinner at subsidized rates.

There is an eatery owner in Mangalore

who serves full lunch at Rs 10, while there is a rapidly expanding startup in Gurugram branded as Janta Meals

that serves wholesome ghar ka khana at Rs 20 to Rs 30. But this Kolkata vendor making profits after filling stomachs at just Rs 6, without any government subsidy or corporate backing, is a revelation. He has proved that low-cost nutrition can be made available to the people by socially-conscious entrepreneurs.