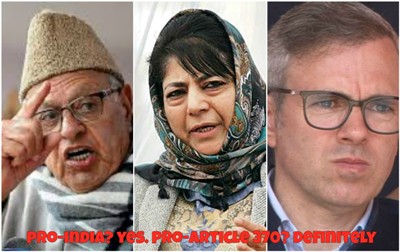 The arrest of 81-year old Farooq Abdullah of the National Conference under the draconian Public Safety Act is deplorable. That this came after a habeas corpus petition was filed in the Supreme Court by Vaiko, the chief of the MDMK party in Tamil Nadu and a good friend of Abdullah for many decades, which demanded that he be produced before the court is all the more shameful. All this while, as the Home Minister Amit Shah had informed the Parliament last month, the government had maintained Abdullah was not detained and it was his wish that he was staying at home. But now he has been legally detained under an act that allows the government to keep him interned for up to two years. He should have been kept under preventive detention like the other leaders.

But those who are saying that the government should not have arrested Abdullah and other Kashmiri leaders as they are pro-India and pro-democracy forget, or choose to overlook, the main reason for their detention. They were also pro-Article 370 and Article 35A. When public policy is changed and if it involves changes to a major provision, preventive detentions are made on an assumption that the person being arrested is capable of creating large scale public mischief that can endanger public safety. Since these frontline leaders were all in favour of the continued application of both the Articles and were expected to vehemently oppose the move to abrogate them, they could have incited the people to rise in revolt against the government's move. That would have resulted in widespread violence and anarchy in the state.

If one has any doubt regarding this, one can read the statements made by these leaders in the past and also what they said when the government started the security build-up in Jammu & Kashmir just before it read down Article 370. When asked by a reporter whether Modi would do away with Article 370 in his second term, Abdullah replied that even if Modi wins 10 terms he would not be able to "touch" the Article, let alone abrogate it. On July 29, Mehbooba Mufti had said that "fiddling with 35A is like touching a dynamite. If any hand is raised to fiddle with 35A, not only that hand but the entire body will burn to ashes." Then, on August 5, minutes after Shah's announcement about the abrogation in the Parliament, Mufti tweeted that "Today marks the darkest day in Indian democracy. Decision of J&K leadership to reject 2 nation theory in 1947 & align with India has backfired. Unilateral decision of GOI to scrap Article 370 is illegal & unconstitutional which will make India an occupational force in J&K"(emphasis ours). She added that "it will have catastrophic consequences for the subcontinent. GOIs intentions are clear. They want the territory of J&K by terrorising it's people. India has failed Kashmir in keeping its promises." Omar Abdullah had similarly said that any such move will be fraught with "far-reaching and dangerous consequences." Political leaders do have the right to oppose any or all moves of the government but not by issuing thinly-veiled warnings or by saying that India will become an occupational force (something which Pakistan is now saying by claiming that India has "annexed" Kashmir).

It was clear that these leaders would have used everything at their disposal to vehemently oppose the Centre's move to abrogate Articles 370 and 35A. However much may one dislike the continued lockdown in the state, one has to admire the government for having maintained peace, even if a forced one. The same would not have been possible if Farooq Abdullah, Mehbooba Mufti and Omar Abdullah were out on the streets to incite the people. Yes, the time is now ripe to take the next big step - that of resuming the political process in the newly-reorganized state. It is upon these leaders to accept the situation and fight elections under the new scheme of things once they are released. But if they choose to incite people and spread anarchy, they must be prepared to bear the consequences. The government of India had got the late Maharaja Hari Singh to sign the Instrument of Accession in 1947 to take the state under its fold, keeping in mind the ground realities then. Articles 370 and 35A were then inserted in the Constitution, again as the government of the day decided that Kashmir needed a temporary special status then. But that was then. More than 70 years have passed. The government of today thought these provisions had outlived their utility. So it abrogated them. There was no deceit then, there has been no deceit now. It was a matter of political analysis then, as it has been now. How can one claim that the politicians in 1947 were right and those in 2019 are wrong?