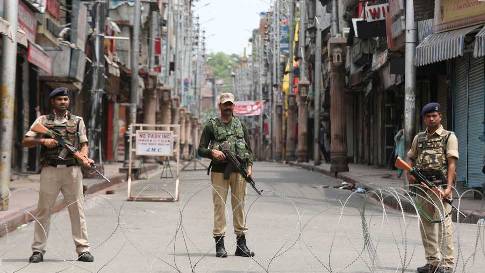 J&K: Normalcy Needs To Be Restored In The Week After Eid

J&K: Normalcy Needs To Be Restored In The Week After Eid

After the Prime Ministerâs address to the nation, the government must now make quick moves in J&K to restore normalcy. That is the first requirement to quell the anger that must be building inside the people against a move that they never expected. They had been fed with the lie that Articles 370 and 35A were permanent and the special status of J&K could not be tampered with. They had been brainwashed into believing that they had a separate constitution, a separate flag and a separate criminal law and they were in no way Indian. This separate identity would have meant that J&K would have remained what it was, a nation within a nation, and it would have always been a fertile ground for the Pakistanis to wage a proxy war with India.

But all that has changed with the reading down of Articles 370 and 35A. The government must now take all measures announced by the Prime Minister in double-quick time. It has already partially restored telephony and internet services. It allowed people to offer Friday namaz in local mosques. It has lifted restrictions under Sec. 144 in the Jammu area and asked schools to reopen. But this is not enough. The Eid festival is on Monday. The restrictions on movement must be lifted partially in the Valley to allow people to visit friends and relatives. Telephony and internet must be fully restored in a couple of days. The local political leaders who have been arrested must be released, maybe in batches starting with leaders of the smaller parties. But all this needs to be done within a week.

The state is already teeming with security personnel. A close watch can be kept on trouble makers to prevent untoward incidences. But care must be taken that protests do not become violent and if they do, the security forces must display exemplary restraint. A few ugly responses from the security forces can throw the state into turmoil. That is what Pakistan wants. That is what the separatists want. They want to show the world that India has annexed Kashmir against the will of its people. They do not need the entire population to stand behind them for this. Just a handful of stone pelters and retaliatory action for the forces will do it. In the present context, no one will remember that it was a daily occurrence in Kashmir even before the special status was done away with. Everyone will say that it is in protest against the reading down of the Articles 370 & 35A.

A report from the Valley says that the security establishment has been enthused by the peaceful way in which Friday namaz passed off. They are thinking of following the same process of allowing people to offer namaz at their local mosques or idgahs. The main Idgah in Srinagar usually has a large congregation on Eid. But this time, the authorities are not likely to relax the restriction on movement to allow this as they feel it will be disastrous to allow such a large gathering which can turn violent if incendiary speeches are made. The same goes for prayers at the Jama Masjid and Hazratbal. The same model will be followed for markets. Shops in residential areas will be allowed to open but restrictions will be imposed on big markets.

This is understandable in the present situation. The authorities need to prevent the congregation of a huge number of people at any place, whether mosques or markets as it can turn out to be a rallying point for separatists. But this cannot remain the standard procedure. After Eid on Monday, the administration will have to lift restrictions one by one, maybe starting with fixed-line and mobile telephony. Internet services and cable television must also be restored in a few days as no newspapers are being published in the state. A blackout is in no oneâs interest as it can lead to rumor-mongering of the vicious kind. The state needs to get back to business soon if the people are to be won over. The anger and resentment will continue to build up if people sit idly at home. It will become easier for politicians and separatists to fan this anger if people do not get back to their daily routine. Hence, normality needs to be restored fast.