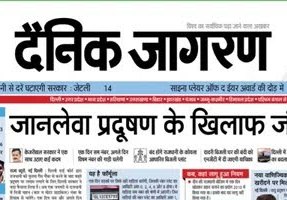 Editor-in-Chief of indiacommentary.com. Current Affairs analyst and political commentator. Writes for a number of publications. View all posts by this Author
In an unprecedented act of defying the Election Commission (EC), the Dainik Jagran group, with wide readership of its Hindi dailies in eastern UP, had chosen to publish the exit polls conducted by Resource Development International (I) Private Limited. The EC has consistently and rightly barred publication of any exit poll results in states where elections are held in phases till the polling for the last phase is over. This sensible practice is followed in order to prevent voters from getting swayed by such polls, whose authenticity is increasingly being doubted. Although it is debatable whether voters are in fact influenced by exit polls in other districts, the ban is appropriate in order to conduct free and fair elections.

Then what prompted Dainik Jagran to publish these results? The Jagran exit polls showed that the BJP was nosing ahead. Although the group is known to be inclined towards the NDA and Modi, it still doesnt make sense for it to risk flouting section 126 A & B of Representation of Peoples Act that carries punishment of 2 years jail and/or fine or both. Is a bigger game being played here that we are missing, given the high stakes involved in the UP polls? Or are the Guptas (owners of Jagran group) letting themselves to be used in this political game? The Jagran group first removed the results from its website and then said that they were published inadvertently. It is hard to believe that any editor of a large media house would allow an inadvertent slip as big as this through his eyes.

Without doubt, publishing the exit poll results was a conscious and calculated decision. Maybe, it was to align the group further with the BJP and Modi. Maybe, it is in anticipation of reaping post poll rewards. Maybe it was for money. Or maybe it was for something even bigger. But for whatever it was done, it was a bad decision. It made for bad journalism. It was unethical and undemocratic. It broke the laws of the nation. It lowered the prestige of the independent media in the eyes of the people. The Jagran group should be prosecuted as per law and maximum punishment should be levied on them.