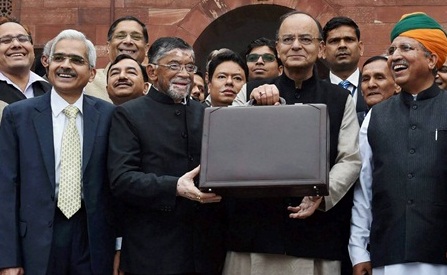 Editor-in-Chief of indiacommentary.com. Current Affairs analyst and political commentator. Writes for a number of publications. View all posts by this Author
The 2017 budget is as much an exercise in political grandstanding as it is a bookkeeping report and a policy document. Very cleverly, the finance minister has woven the theme of rural upliftment, farmers benefits, push to infrastructure and backward class poverty alleviation in the backdrop of elections in 5 states a few days from now. It needs reiterating that in UP 25% of the population belongs to the backward classes while the figure in Punjab is 33%. Further, both Punjab and UP are agrarian economies. Without falling foul of the Election Commission fiat of not announcing any new schemes for states going to elections, Jaitley has fulfilled what the BJP must have demanded from him.

But looking at it from another perspective, the rural economy (which by and large means the farm sector), along with the informal sector, had been the worst sufferer in the demonetization exercise. Since both these sectors are predominantly cash dependent, the ban on cash meant that business came to a standstill. Hence, it was required that they be given some kind of relief. Thus, the decision to increase the outlay on spending in the rural sector is prudent as it will nurse it back to health. The decision to expand the reach and scope of fasal bima yojana (farm insurance) is also welcome. A micro irrigation fund of Rs 5000 cr has also been created through NABARD. Putting money in the hinterlands will also drive demand for goods and services.

Infrastructure drives employment as apart from farm, construction is where most of the migrant labour force finds regular work. Since private investment in this sector was not forthcoming due to slack demand, building up of inventory and consequent postponement of new projects, the governments push for infrastructure development will generate employment. With simultaneous focus on affordable housing and rijigging of rules to benefit real estate developers, construction activity is likely to firm up from the second quarter in the next financial year and unemployment figures will go down from current levels.

The 50% reduction in income tax payable by people who fall in the Rs 2.5 lakh to Rs 5 lakh income bracket is welcome, but by imposing a surcharge of 10% on those earning above Rs 50 lakh, the finance minister seems to say that the more honest or hardworking you are, the more you will be penalized. This also goes against the avowed aim of making tax laws simple. Surcharges should be avoided per se. The I-T department should work to broaden the base of taxpayers as the finance minister has admitted that too few people pay taxes in India. Jaitley lost an opportunity by not imposing a minimum tax on those who submit below taxable returns just to get the I-T acknowledgement that is required for various reasons.

While neither reducing the rate of corporate tax nor announcing the time frame for doing so, the finance minister has given a 5% cut to companies whose turnover is less than Rs 50 cr. This is likely to benefit a large number of companies as Jaitley himself said that more than 96% companies filing returns fall in this category. It will also encourage people to adopt the corporate route in doing business. The abolition of FIPB is a welcome step in enabling ease of doing business in India.

The decision to ban all cash transactions over Rs 3 lakh is welcome, so is the decision to do away with duties on import of POS machines and finger-print and iris scanners. As India moves towards transparency in business transactions by adopting the banking and digital route, cash must be treated as a stigma in all transactions, except when it is unavoidable. But some thought must also be given to plug the loophole whereby traders break large cash transactions by making several small invoices, otherwise no limit will serve the purpose of rooting out such transactions.

The government has also made a beginning in trying to stop the use of black money in political funding in two ways. First, it has substantially reduced the amount for receiving cash donations from unknown sources from Rs 20000 to Rs 2000. Although this is not going to solve the problem in itself as the parties can still theoretically break large cash donations and receive them from hundreds of people, but it is going to be tough to do so. Secondly, it was felt that many did not contribute to political parties through banking channels for the fear of having their names disclosed. By announcing that electoral bonds will be made available for this, Jaitley has ensured that people who wanted to donate legally, but anonymously, can now do so. These bonds cannot be purchased in cash and once donated, can be encashed in the accounts of registered political parties only.

Arun Jaitley has said that this is a spend more budget. Obviously, this means that the government wants to generate demand for goods and services to revive industry. But the near absence of measures to support private investment goes against this. The government can only be an enabler. Private enterprise is the driver of growth and employment. Hence, the lack of support in the budget is surprising. But the finance minister has done well to stick to fiscal prudence by eschewing the temptation to play to the gallery in this year of mini-election. Although the budget has missed out on many reforms, it can be seen as a budget that seeks to repair the short term damage done to some sectors by demonetization. It is also a budget that clearly establishes that the Modi government has now embraced the pro-poor, though thankfully not the pro-subsidy (despite talks about universal basic income) route like never before.