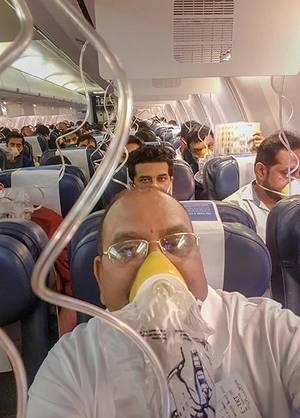 Linus tackles things head-on. He takes sides in his analysis and it fits excellently with our editorial policy. No 'maybe's' and 'allegedly' for him, only things in black and white. View all posts by this Author
What happened on the Jet Airways flight 9W 697 from Mumbai to Jaipur was scary. Cabin pressure dropped to alarmingly low levels, leading to some passengers bleeding from their nose and ears. It was not a technical glitch. Instead, the trained cockpit crew forgot to press the so-called bleed switch that regulates cabin pressure that resulted in the dangerous situation. More than 30 passengers were affected, most of whom were given first-aid at Mumbai airport while five were taken to Nanavati Hospital and discharged after treatment. The flight was forced to return to Mumbai shortly after take-off.

Passengers on the flight have reported that the cabin crew panicked more than them and was in no position to help them, either due to lack of training to handle such an emergency or due to fear. They did not even offer to help children with oxygen masks, let alone provide succor to bleeding passengers. This was highly irregular and irresponsible. There are hundreds of cabin crew training institutes in India churning out boys and girls to work in the aviation industry. Ostensibly, these institutes provide top of the line training as they charge a bomb. Then there is the pre-job training which the airlines themselves provide. If even after this the crew is not able to handle emergencies and is just there to sell meals or provide water then this is a very sad state of affairs.

And what about the cockpit crew? India has a mix of local and expatriates working as pilots and co-pilots. They are being paid fancy salaries. Some of them are highly experienced. This kind of mistake is neither expected nor to be tolerated. The bleed switch is shut off during take-off to allow maximum power to the engine, but is switched on immediately on reaching a comfortable height. Failure to do so can result in a situation like the one that happened on this flight. Pilots are not expected to be so negligent.

Civil aviation minister Suresh Prabhu has asked the DGCA to prepare a comprehensive safety audit plan for all scheduled airlines, airports and flying schools. But if this was a human error, no safety audit plan is going to work. The need is to monitor cockpit crew and airline flying schedules. One feels that the way airlines rush flights, such human errors can creep in due to time pressure. Cockpit crew gets little time to get their bearings right between return flights. This needs to be addressed if such errors are not to be repeated.