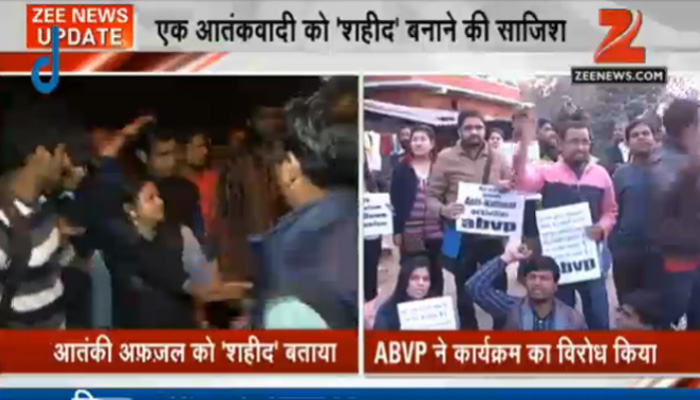 Editor-in-Chief of indiacommentary.com. Current Affairs analyst and political commentator. Writes for a number of publications. View all posts by this Author
People are reminding us from television screens and by issuing press statements and tweets that Jawaharlal Nehru University (JNU) is a premier education institution of India. Then is it not all the more painful for ordinary citizens to watch anti-national sloganeering there? What kind of next generation are we preparing in our âpremierâ educational institute? Will it be a generation where some will take pleasure in abusing the honour of their own nation? Will it be a generation where some will glorify and sing paeans of praise for known enemies of the country?

I, for one, do not believe this. In my interaction with a wide cross section of youngsters all over India, I have seen in them a maniacal zeal to succeed and do something that will take them ahead in life. Most of these youngsters are extremely focused and have no time for such âextra-curricularâ activities. They will definitely stand up when the National Anthem is being played and will never think of bad mouthing the country. Then where do students who shouted those slogans, or allowed them to be shouted, come from? Who radicalizes them and poisons their minds to the extent that they think nothing about abusing the nation in front of television cameras? These are questions that need urgent answers if we as a nation do not wish to see a repeat of what happened at the JNU. I have high hopes from our youngsters and I am not allowing the likes of such 'JNU-types' to make me alter my view.

1. Just a few, maybe two dozen people (mind you, they never say students) did this.

2. They were not students, they were outsiders.

3. The police were highhanded.

Now let us come to what happened in JNU. Walls had posters which said Afzal Guru was a âshahid.â Students â they were certainly not outsiders â shouted slogans like India Murdabad and worse. A similar event in praise of Afzal was held at the Press Club the next day.

Let us take the first two points together. It is no oneâs case that the whole student body of JNU is anti-national. But if there are some bad fishes in the pond, is it not the duty of the others to identify them and bring them to justice? If those two dozen people were outsiders, why did the others not intervene? Why were they allowed to dishonor the nation in the manner they did without a being told to shut up? If the majority remains silent and allows a small minority to hijack any institution it is the majority that is at greater fault. Then the excuse that âit was done by just a fewâ does not hold water. Dissent and alternative voices are good for discussion and debate and are the very backbone of democracy. But a line has to be drawn somewhere. Calling for the death of the nation or wishing it to be broken into thousand pieces or asking for an integral part of the nation (Kashmir) to be made independent and eulogizing Afzal Guru as âshahidâ is not my idea of dissent. People do not fail to remind us that in the US, citizens are even allowed to burn the national flag to show dissent. But India is not the US. The sensitivities of Indians are different from those of the Americans. What happened in JNU was not dissent. It was plain, simple and old fashioned abuse of national honour and those who cannot see it as such are being blinkered. The US has the very inclusive First Amendment that guarantees a near total freedom of speech and expression. In India, our freedom is tempered by several laws that put restrictions to protect the diversity of the country. In any case, what we are now witnessing is the fact that some people have decided that it is only the Left liberal discourse that is good for debate and discussion. It is only the Left liberals who are intelligent or capable enough to âguideâ the nation in such matters. Anyone who differs from that ideology is immediately branded as intolerant. That, in my view, is the biggest intolerance.

What do you expect the administration and the police to do if images of anti-India sloganeering are flashed across television screens all over the country? Remain silent and show that it does not matter if a few âmisguidedâ students wish India to be dead or to be broken into thousand pieces? Treat students with kid gloves? They are not kids for Godâs sake â they are educated young men and women. They were well aware of the consequences of what they were doing. With emotions building up, there was even a chance of a law and order problem if ordinary citizens had taken things in their own hands. Where the administration erred was in picking up Kanhaiya Kumar instead of those who had indulged in the sloganeering and using the sedition law.

Now let us come to the sedition law that was applied to arrest the student leader. It is a relic of the pre-Independence era and has been misused in the past (remember cartoonist Aseem Trivedi). It gives wide ranging powers to the administration to arrest anyone who goes against it, as distinct from anyone who goes against the country. Purely for this reason, the sedition law should not be in the statute books. I am of the opinion that the scope of the Prevention of Insults to National Honour Act, 1971 (as amended in 2005)should be widened to include offences such as slogan shouting against the nation, praising people declared national enemies or terrorists by courts and using the salutation âshahidâ for them.

Abusing national honour in the guise of dissent should not be tolerated. Who decides when debate descends into an anti-national free for all. As educated Indians do not allow their children to use inappropriate words in their presence, the same principle should apply to those using inappropriate words against the nation. If it is tolerance not to do anything despite hearing abuses being hurled at your country, I beg to say that I wish to be intolerant.