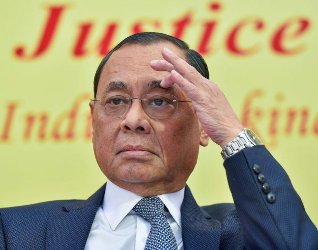 Justice Gogoi: Brazening It Out

Justice Gogoi: Brazening It Out

Editor-in-Chief of indiacommentary.com. Current Affairs analyst and political commentator. Writes for a number of publications. View all posts by this Author
There are two sacred principles in public life: one should not only be pure but also appear to be so and one should avoid conflict of interest. One more principle is there in the legal field: one must never be a judge in his own cause.

When charges of sexual harassment were leveled against CJI Ranjan Gogoi, he ceased to appear pure. Obviously, he is innocent till proved guilty of the charges, but the very fact that he occupies the highest judicial post in the country, it is required that he disassociates himself from all duties till the matter is resolved. Just raising the bogey of the independence of the judiciary being in peril is not going to help. The case needs to be taken to its logical conclusion and Justice Gogois presence in the Supreme Court, even though he will obviously not hear the case, is not proper.

Then, bypassing all norms of propriety, the CJI constituted a special bench which included him, dealing a severe blow to avoiding conflict of interest. He recused himself after making opening remarks and did not sign the order passed (which was another first, as only the other two judges signed the order).

The Women in Criminal Law Association have issued a statement which states that the legal institutional response to such a complaint as mandated under the In-House Procedure applicable to Judges of the Supreme Court and the High Court, along with the Sexual Harassment of Women at the Workplace (Prevention, Prohibition and Redressal Act) Act, (POSH Act) read with the Supreme Court Sexual Harassment Regulations, 2013, is for the designated inquiry committee to take cognizance of the complaint, constitute an inquiry committee and give notice to the respondent as to the initiation of such proceedings. This was not followed.

When #MeToo allegations were made against Union minister MJ Akbar and many other public figures, mainly from the film industry, there were strong repercussions. Public pressure forced the minister to resign. Accused from other fields were isolated with some people even refusing to work with them. Remember, all this was before they were proven guilty, just to uphold the purity principle.

If MJ Akbar, Alok Nath and others are exonerated by the courts, they will be vindicated and will be welcomed back in their respective fields. Those who made the allegations will be suitably punished as per law. But till then, they have to be away from power, from anything through which they can influence the case against them.

The same goes for Justice Ranjan Gogoi. In fact, being the Chief Justice of India, it is all the more important that he stays far removed from the legal process that will now unfold to verify the charges leveled against him. The country is waiting with expectation to see what the judiciary does when faced with the dilemma of one of its own being charged with such serious impropriety. More than the independence of the judiciary is at stake and not in the way Justice Gogoi means it.