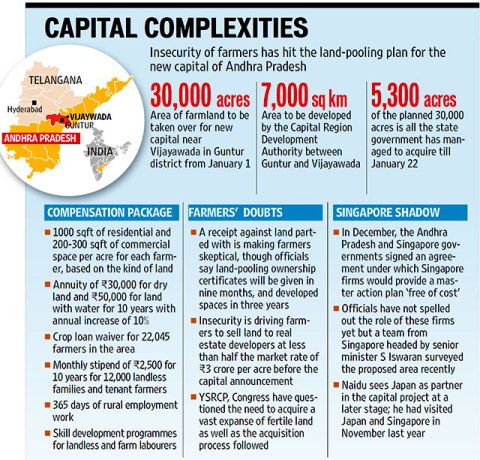 Editor-in-Chief of indiacommentary.com. Current Affairs analyst and political commentator. Writes for a number of publications. View all posts by this Author
After a few news reports when it was announced, not many newspapers or channels have carried the reports of the excellent solution to land acquisition being carried out by Chandrababu Naidu in Andhra Pradesh. While the government and the opposition is crossing swords over this or that clause in the Land Bill and are grappling over whether there should be consent of 80% landowners or whether there should be social impact assessment, Naidu has quietly ushered in a mini revolution. He has made landowners Ã¢â¬" mostly farmers in rural areas Ã¢â¬" partners in progress by pooling their land to build a new capital for the state. Economist and columnist Swaminathan S Anklesaria Aiyar has been writing about it in the TOI for some time now and according to him the idea has the potential of winning over the farmers like nothing before.

Put simply, land pooling is a process where small and marginal farmers pool their land to make a huge land parcel that can be used for any purpose. Naidu has got thousands of farmers to pool their land for the new state capital. They have been promised 1000 square yards of residential land and 200-450 sq yds of commercial property per acre of land pooled. The land they are giving up is valued at Rs 1-2 cr per acre now. Once developed, it is expected to yield Rs 8-9 cr per acre. Apart from this, all farmers will get an annual annuity of Rs 30000-50000, payable monthly till the 10 years it will take to build the city. Even landless labourers will get Rs 2500 per month (all figures as quoted by Anklesaria Aiyar). The scheme received an overwhelming response initially. Announced on January 2, 33000 acres were pooled by February 28.

It is not difficult to deduce why the scheme is a hit with the farmers. It takes care of three basic things that all farmers resent when the government forcibly acquires their land. The first is loss of ownership. In rural India, a personÃ¢â¬â ¢s worth is still gauged by the land he owns. Once the land is gone, he feels orphaned. By promising to return him developed land, the AP government is assuring him that he will still be a land owner. Secondly, when land is acquired, the farmers often complain that it is done at a very low price. But in pooling, the AP government is giving the farmer an opportunity to get back developed land in a swank new city which he can rent out or sell at the going market price. He does not lose on price or on appreciation. Finally, when land is acquired, the farmer loses his immediate surce of income. To offset this, Naidu is offering them monthly payments to help in running the household. Granted that the payment is low, but it is expected that the farmer will get work in the various construction projects that will come up in the area. The landless labourer has also been looked after.

But as usual, as the initial euphoria about the newness of the scheme died down, no new landowners are coming forward. Hence, the Naidu government announced that it will begin acquiring rest of the land needed since the plan for capital development was getting delayed. Now, under pressure after a farmersÃ¢â¬â ¢ stir against acquisition, the municipal administration minister P Narayana has announced that government will not acquire land forcibly and only go for pooling through persuasion. He has appealed to farmers to cooperate.

On paper, the scheme looks foolproof. It is a win-win situation for every stake holder. If it is successful, it will definitely change the way land is put to uses other than farming in India. But these are early days. The loss of interest in AP after the initial euphoria proves that once vested interests start poisoning the minds of the farmers, schemes related to any kind of land transfer, by whatever name called, have very little chance of success in India.Also, given that there are countless and varying idiosyncrasies of farmers all over India, what is successful in AP might not work in, say, West Bengal or Bihar. Still, it can be tried to overcome the resistance to the Land Bill.