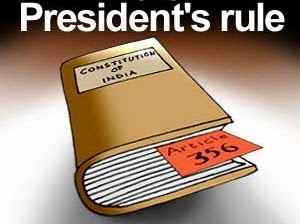 Learn Your Lesson: Do Not Misuse Article 356

Learn Your Lesson: Do Not Misuse Article 356

Editor-in-Chief of indiacommentary.com. Current Affairs analyst and political commentator. Writes for a number of publications. View all posts by this Author
The Supreme Court order on the restoration of Nabam Tukis Congress government in Arunachal Pradesh, apart from being a slap in the face of the NDA government, shows President Pranab Mukherjee and the legal advisors of the government in very poor light. Even law students know that with the apex court having made the actions of the state governors justiciable (in fact the apex court tore into the governors actions, calling them unconstitutional in the instant case)and the Centres actions after receiving the Governors report open to judicial review in the Bommai judgment on Article 356, it is almost impossible to misuse the Article to dismiss state governments without foolproof reasons.

The exhaustive guidelines established in the Bommai judgment put a huge responsibility on the President to ensure that the intention of Union Cabinet is not ulterior, or the reasons spelled out conclusively show breakdown of constitutional machinery in the state. He is also required to ensure that proper procedure is followed before a proclamation imposing Presidents Rule is signed. The President can take legal advice if he wishes. Pranab Mukherjee had precedence  former President K R Narayanan had twice refused to sign such proclamations in 1997-98 after the Bommai judgment.

Given the strict guidelines in the Bommai judgment, it is surprising that the Central governments legal advisors let it go ahead with the dismissals in Arunachal Pradesh and Uttarakhand. The government and the BJP should have known that the short term pleasure of having dismissed a Congress government was not worth the loss of face it would face if the same was reversed by the courts. This is exactly what happened. It should also have known that in the world of Indian politics, it is always winner takes all. Despite the horse trading involving crores of rupees implicit in misuse of Article 356, it is often seen that it just takes a court victory to bring the flock together again. It will now be seen that some Arunachal Congress rebels will return to CM Nabam Tuki, claiming that they were lured by the BJP to revolt against him. If the BJP was determined to make the Congress government fall in the two states, the best way would have been to support the rebels and reduce the governments to minority on the floor of the house.

But Rahul Gandhis remark thanking the Supreme Court for letting PM Modi know what democracy is all about sounds hollow in the face of the history of misuse of Article 356 which shows that it was always the Congress that made maximum (mis)use of the Article to dismiss state governments inimical to its interests when it ruled at the Centre. No Congress prime minister was free from the habit of misusing the Article for political gain. One hopes PM Modi and the BJP have learnt their lessons and will refrain from dismissing state governments for flimsy reasons in their quest to have a Congress-mukt India.