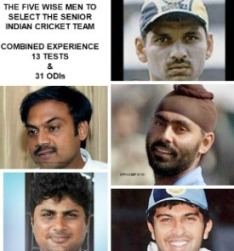 The Least Experienced Selection Committee Ever?

The Least Experienced Selection Committee Ever?

Editor-in-Chief of indiacommentary.com. Current Affairs analyst and political commentator. Writes for a number of publications. View all posts by this Author
The Board of Control for Cricket in India (BCCI) has come up with the least experienced ever senior selection committee. In open defiance of the Supreme Court appointed Lodha Committee (LC) recommendations that stipulated for a three men selection committee, the BCCI has continued with the five men set up based on regional representation. But a closer examination shows that the committee has been so selected that if matters come to a head, the Board will be able to reduce it to three and meet all LC stipulations.

The committee comprises of former India wicketkeeper M S K Prasad (6 Tests & 17 ODIs) as chairman and includes Devang Gandhi (4 Tests & 3 ODIs), Sarandeep Singh (3 Tests & 5 ODIs), Gagan Khoda (2 ODIs) and Jatin Paranjpe (4 ODIs). Hence, the five wise men have a total experience of just 13 Tests and 31 ODIs. Out of these five, Prasad and Khoda were there on the outgoing panel too. Closer examination shows that only the last two have not played Tests. Hence, if the LC puts pressure, the BCCI can easily drop Khoda and Paranjpe to have a three men committee all whose members would meet the other requirement of having played Tests for India.

The BCCIs excuse for coming up with this kind of committee is that it has taken care to ensure that there was no conflict of interest. It had also called for applications for the post of selectors by advertising in the media. But the situation where competent or more experienced former players are not available to sit on the committee is of the BCCIs own making. By having such cash-rich tournaments as the IPL and the Champions League, the Board has opened up lucrative avenues of employment for ex-players. This means that there will always be conflict of interest for known and experienced ex-players as they will be on contact with the various teams in those tournaments. The BCCI will be left only with less experienced players who do not find jobs, or find a lesser paying job, in those tournaments.

Despite the BCCI having made the selectors job a paying one, the opportunities and remuneration with tournament franchisees is more lucrative. Hence, is it ethical to have less experienced players sit on selection committee and allow the better ones to be employed by franchisees? Any former player, selected for the job of being a national selector, should be made to give up his other job and sit on the committee if he wishes to enjoy the many benefits the BCCI hands out to such ex-players. If the selection committee job can be seen as national duty, ex-players must make themselves available for it unconditionally, especially as it is now a paying job.