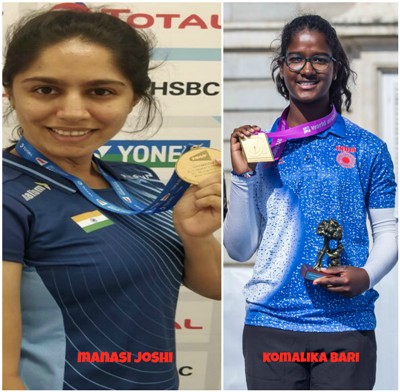 In the euphoria surrounding the gold medal won by PV Sindhu at the World Badminton Championships at Basel, we must not forget two other gold medals won by Indian sportspersons that also count as them being crowned world champions. Manasi Joshi took the top spot in the Para World Championships, also at Basel and it was before Sindhu won her gold. Manasi beat world number one and fellow Indian Parul Parmar to clinch the gold. In another country, 17-year old Komalika Bari continued the fine tradition of archers from Jharkhand excelling on the world stage. She clinched gold in the recurve event at the Cadet World Archery Championships at Madrid in Spain.

Manasi, who lost her left leg and had her arm broken in a road accident in Mumbai in 2011, trains at the Gopi Chand Academy like Sindhu. She is employed by BPCL and supported by Malcolm and Welspun group. She said it felt great to walk the same corridors and play in the same arena and on the same courts as the other great players. She also felt great to be the world champion.

Komalika, on the other hand, beat the higher-ranked Japanese archer Sonoda Waka 7-3 to lift the gold. Her achievement is all the more remarkable as it comes against the backdrop of the mess in the Archery Association of India (AAI) which will lead to Indian archers being banned from competing in any events worldwide. Komolika displayed excellent marksmanship to score perfect 10s many times and scored 29 out of 30 on three occasions in the five-setter. Alas, we do not know when she will be able to compete next on the world stage as the AAI is unlikely to sort out its mess in the near future.

These girls have made India proud and they should be hailed.