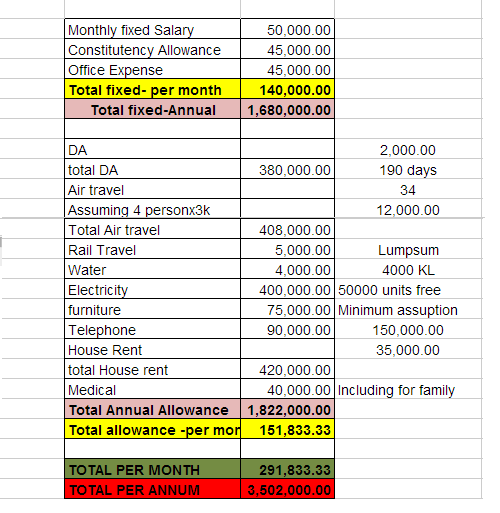 Editor-in-Chief of indiacommentary.com. Current Affairs analyst and political commentator. Writes for a number of publications. View all posts by this Author
Petroleum minister Dharmendra Pradhan is writing to all MPÃÂ¢Ã¢âÂ¬Ã¢"Â¢s, as well as some state CMÃÂ¢Ã¢âÂ¬Ã¢"Â¢s, to ask them to surrender their subsidized LPG connections and buy the cylinders at market rates. This, he says, will help in cutting the government subsidy bill. If we were to assume that all 543 Lok Sabha and 245 Rajya Sabha MPÃÂ¢Ã¢âÂ¬Ã¢"Â¢s, as also the CMÃÂ¢Ã¢âÂ¬Ã¢"Â¢s of 29 states, give up their subsidized connections, the nation will save Rs. 33 lakh per year in subsidies at current rates. (This has been calculated as 817 persons foregoing Rs 330 per cylinder for 12 subsidized cylinders in a year).

This amount is just loose change when compared with the perks being enjoyed by the MPÃÂ¢Ã¢âÂ¬Ã¢"Â¢s. A look at the table alongside will give a general idea.

If just the electricity subsidy given to the MPÃÂ¢Ã¢âÂ¬Ã¢"Â¢s is withdrawn, the nation will save Rs 31.5 crore, which is nearly 10 times more than what will be saved if the MPÃÂ¢Ã¢âÂ¬Ã¢"Â¢s give up subsidized LPG connections. Please keep in mind that all the perks given to MPÃÂ¢Ã¢âÂ¬Ã¢"Â¢s are tax free. In addition to these, they also have subsidized canteen facilities in Parliament, pick up and drop from Parliament to place of residence at just Rs 5 per trip, Rs 4 lakh loan at negligible rate of interest to buy a vehicle and grant to buy computers which they can keep after their term is over. You can read the full list at http://164.100.47.134/New_Events_LS/writereaddate/English%20FACILITIES64p.pdf

Hence, as an exercise in reducing subsidies, this is just a gimmick to grab headlines. But such gimmicks have a purpose. If the government manages to persuade the MPÃÂ¢Ã¢âÂ¬Ã¢"Â¢s to give up the subsidized connections, it will set an example. Then, the government can similarly persuade high ranking officials and private individuals having incomes above a certain level. If we believe that corruption flows from top down, then we also have to believe that good social habits will also flow likewise.