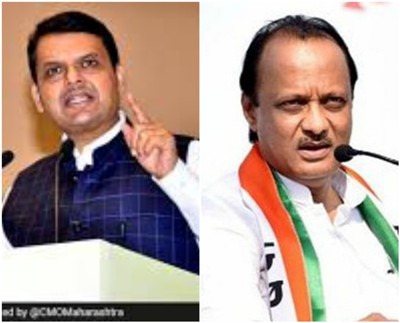 Till late yesterday, there was every indication that the Shiv Sena-NCP-Congress combine would stake claim to form the government in Maharashtra with Uddhav Thackeray as the chief minister. NCP supremo Sharad Pawar had confirmed as much. So what happened in the next 8 hours to change all equations? It seems Sena's Sanjay Rout was right when he said that it would take 100 births to understand what Pawar says.

There is speculation that Ajit Pawar acted out of his own accord and brought the NCP on board. But that is next to impossible given the fact that nothing in the NCP moves without Pawar's go ahead and most MLAs owe their loyalty to him. Ajit Pawar neither has the backing nor the authority to take such a momentous decision so late in the game. Although Sharad Pawar has said that he does not endorse Ajit's decision, it remains to be seen what he does now.

The BJP was playing it cool all this while. Even yesterday, Nitin Gadkari said that a Sena-NCP-Congress government would not last for more than 6 months, giving an indication that the party was resigned to sitting in the opposition for now. But it is now clear that it had kept on negotiations with the NCP.

In this whole episode, the Congress has cut a sorry figure while the Shiv Sena has been made a bakra. Despite her reservations, Sonia Gandhi gave her assent only because Sharad Pawar convinced her. Little did she know that parallel games were being played by the NCP! As for the Sena, it has been left high and dry with a broken alliance and lot of things which its leaders said that they will regret in days to come.

The episode shows that despite NCP's chief spokesman saying that Pawar had beaten the Chanakya of Indian politics (in an oblique reference to Amit Shah), it is Shah who has had the last laugh. What remains to be seen, though, is how many NCP MLAs will go with Ajit Pawar if Sharad Pawar disowns him. The BJP-NCP government claims the support of 160 MLAs. Only a floor test will prove the claim.