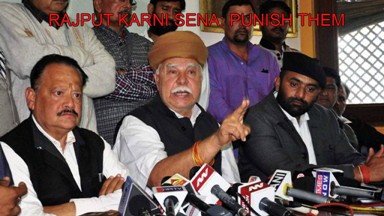 Editor-in-Chief of indiacommentary.com. Current Affairs analyst and political commentator. Writes for a number of publications. View all posts by this Author
Yogendra Singh Khatar, Mumbai leader of Shri Rashtriya Rajput Karni Sena, has said that some members of the Rajput fraternity saw the movie on the direction of their national president Sukhdev Singh Godamadi and they have come to the conclusion that their objections against Padmavat were unfounded. The movie does not have any objectionable material and in fact glorifies Rajputs. Hence, they were withdrawing their protests against the film and would let it release in all states, including Rajasthan, Madhya Pradesh and Gujarat.

Should we be grateful for small mercies? Or should we take these duffers to court and make them pay for the public and private property destroyed during their year-long violent protests? After all, the courts had asked the government to collect compensation from Dera Sacha Sauda for the loss suffered by the people when they protested the arrest of Ram Rahim. So why not collect similar compensation from the Karni Sena? If they fail to pay the compensation each one of their office bearers should be punished with jail terms for orchestrating a false campaign and disturbing public peace.

It is a sad practice in India to take up a campaign against a work of art on hearsay and rumour. None of those who are at the forefront of such attacks (and the irony of the situation is that these very people are supposed to be opinion shapers and leaders of communities) ever see a film or painting or read a book but pronounce it objectionable or against their caste or community. Then, they arrange a circus of protest with the gullible whom they can brainwash.

This is the right time to put a stop to this. The Karni Sena has admitted to its folly. Now it must be made to pay or its office bearers should be sent to jail. Similarly, all those who announced awards for maiming the actors or beheading the director of the film must be tried under relevant laws.That will be a clear signal to all future protestors. If the Karni Sena and others are allowed to go scot free, there will more protests in future. These future protests will be more violent and will be for increasingly trivial things. The nation cannot afford that.