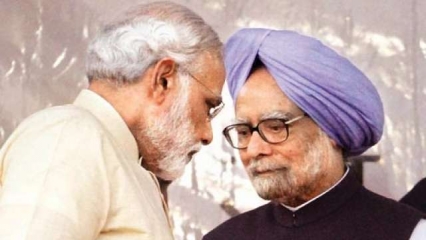 Editor-in-Chief of indiacommentary.com. Current Affairs analyst and political commentator. Writes for a number of publications. View all posts by this Author
It is amusing to hear a person under whose regime India witnessed a flurry of big ticket scams running into mindboggling figures, under whom crony capitalism reached new heights and who presided over a remote controlled government, lecture the present dispensation over demonetization. It is precisely because Dr Manmohan Singh allowed the black money problem to fester and sink to new lows that Modi had to think of such a drastic step.

Dr Singh has said that demonetization is monumental management failure and that it was organized loot and legalized plunder. While it can be granted to Dr Singh that the management was sloppy, but it must also be kept in mind that although it has not been spelt out in words, the scare of a leak of the imminent move forced the prime ministers hand and he had to announce the scheme much before it was intended. Hence, although there were not enough new notes in stock and proper rules had not been drafted, the scheme had to be announced if its objectives were to be met.

As for organized loot and legalized plunder Dr Singh should remember that demonetization is going to benefit the nation by filling bank coffers, netting new tax payers and bringing additional tax for the treasury  in short, bring money back in the legal economy. But the organized loot and illegal plunder in scams under Dr Singh managed to increase the net worth of UPA supported netas and their cronies. It took out massive amounts of money from the legal economy. Banks continued to lend to favoured businessmen  throwing good money after bad  and their balance sheets became redder by the day. The economist in Dr Singh could not do anything as he had prostituted his learning to be His Masters Voice.

Now, the Congress gloats that there must be something seriously wrong if Manmohan Singh has chosen to speak against it. This is a very mischievous statement. While it seeks to project the criticism of demonetization by Dr Singh as something great, it forgets that being a Congressman, his critique just followed the party line without giving any solid backing  only his choice of words was better than lesser mortals. It also seems to say that since Dr Singh did not speak against all the scams under him, they were not bad. Dr Singh lost the moral authority to speak on anything by allowing corruption and generation of black money reach new heights under his stewardship.

He may be a good and well-respected economist but Dr Singh has never been a good politician. As a Congressman, his learning was put to limited use by the person who handled the remote device. The policies were decided elsewhere. Dr Singhs name was used to give them legitimacy. That was the real tragedy. Dr Singh could not achieve even 10 percent as prime minister of what he achieved as finance minister under P V Narashima Rao. Hence, even though he might be quietly applauding Modis courage in calling the bluff of the plunderers of Indian economy, Manmohan Singh has to say what the party wants him to.