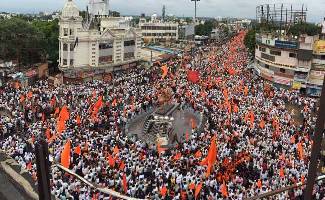 Editor-in-Chief of indiacommentary.com. Current Affairs analyst and political commentator. Writes for a number of publications. View all posts by this Author
Three boys raped and murdered a 14-year old in Korpadi village in Ahmednagar district of Maharashtra in July.

These are the two ways to look at what happened in Maharashtra two months ago. Without trivializing the crime of rape and murder committed by the three boys in any way, it needs to be said that putting caste labels on perpetrators and victims has the effect of unleashing a social backlash that sometimes spirals out of hand.

A similar thing is happening in Maharashtra. The Marathas have been angry for a long time. They allege that despite being the dominant inhabitants of the state, they do not receive any benefits. The rape and murder has triggered a backlash that is now feeding on suppressed anger and is being inflamed by rumours and uninformed assumptions.

Marathas are demanding the abolition of Scheduled Caste/Scheduled Tribe Prevention of Atrocities Act (POA) 1989. Despite crime statistics relating to FIR filed and convictions made under the Act tell a different story, Marathas believe that the Act is being used to target them. Since a clause in the Act provides for monetary compensation to aggrieved SC/ST and Adivasi persons, Marathas feel that they file false cases against them just to take the money.

Like Patels in Gujarat and Jats in Haryana and Rajasthan, the Marathas are also asking to be named as Other Backward Class (OBC) in order to avail the benefits of affirmative action. These agitations have the potential of shredding the social fabric of the country. All political parties are guilty of fanning them in order to build vote banks. We often talk about the Muslim vote bank. But the country is being divided into tiny and not-so-tiny vote banks in all states and these are more damaging that the so-called Muslim one.

The SC/ST and Adivasi constituency was pandered to by one government with the enactment of the Atrocities Act. Now, another government will pander to the Maratha constituency in a different way to quell the protests. It goes on this way and very soon there will be nothing left with governments to give away to the sub-sub-sub caste of some caste that may rise in protest in future.

Pandering to caste-based regional sentiments is dangerous. The Marathas took out a silent (Muk) rally in Pune that drew lakhs. As aspirations rise, there will be more such protests will happen, sometimes leading to arson, looting and statewide bandhs for days, as happened in Haryana not long back. As politicians fail to learn from history, they will continue to appease and divide people in a manner most gainful for them. It doesnt matter to them if the country suffers for that.