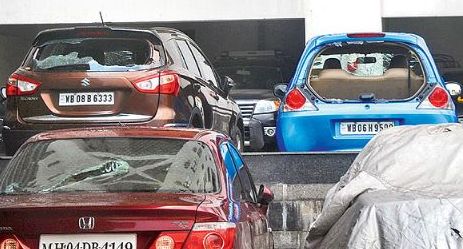 By our team of in-house writers. View all posts by this Author
Kolkata witnessed despicable mob mayhem on 18th September that destroyed more than 70 private vehicles in a multistoried residential complex  all on the suspicion that a car that was involved in an accident nearby that killed one person and injured two others belonged to a resident of the complex. A mob of more than 150 people from nearby slums entered a private property after overpowering security guards and started destroying private property without any rhyme or reason. What is wrong with our social values?

Instant mob justice is nothing new to India. We witness this every time road accidents take place and if the driver of the vehicle is unfortunate enough to be caught by the mob. Without identifying the cause of the accident, the mob metes out instant justice by torching the errant vehicle and beating the driver to their hearts content.

But the instant case was different. The accident took place some distance away from the housing complex. The offending car did no proceed to the complex. The trigger was a rumour, spread by a person who washed cars in the complex that the vehicle number belonged to a resident in the complex. It turned out that the last four digits of the number matched with another car in the complex and not the Mercedes involved in the accident.

Further, the accident took place at 3 am. The attack on the residential complex took place at 8 am. In those five hours, rumours were flying thick and fast in the three or four nearby slums, whose residents were all on the roads. What was the police doing then? Is it not their duty to keep tabs on simmering tension in any locality and keep in touch with their informers to quell any incident like the one that happened? When the mob proceeded to attack the complex, the police were outnumbered. Why enough policemen were not present at the spot?

The biggest question is how do people find the courage to indulge in such acts of vandalism? While it is true that a mob is faceless, still when it is proven that only people from nearby slums took part in the act, there must be some mechanism whereby they are punished. Mob justice must not be tolerated. Not punishing them just makes them bolder and they will continue with the madness, next time on a trivial pretext. Exemplary punishment needs to be meted out to the vandals, if not all then at least the known leaders.