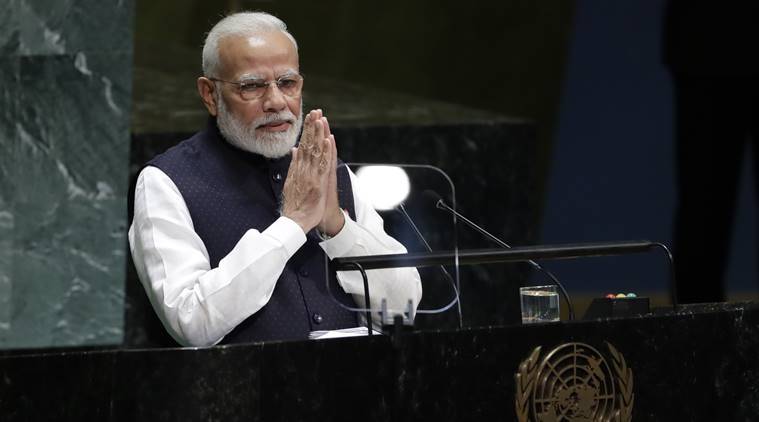 In his speech at the UN General Assembly, Prime Minister Narendra Modi once again told the gathered leaders that terrorism âis one of the biggest challenges, not for any single country, but for the entire world and humanityâ. He also made a strong pitch for giving a new direction to multilateralism as he said that we do not have âan option to restrict ourselves to our bordersâ.

The Prime Minister invoked the message of peace and harmony given by Swami Vivekananda to tell the Assembly that India had given Buddha and not Yuddha to the world. He said that the world's biggest democracy still has the same message for the world -- harmony and peace." Modi also said that the level of anger in the world against terrorism leaves a lot to be desired. He said that there was a great amount of anger in India and at the same time, the nation was committed to fighting terrorism tooth and nail.

Modi also dealt with issues like climate change, renewable energy, cleanliness and poverty alleviation schemes of his government. He said that the success of the Clean India Mission holds a lesson for the entire world for the speed and efficiency with which it was executed in the last five years. He also reiterated Indiaâs commitment to achieving promised targets for renewable energy and reducing GHG emissions.

Without once naming Pakistan or Kashmir, Modi very succinctly put forward Indiaâs views on cross border terrorism and the need for the entire world to unite and fight the biggest challenge before humanity. Everyone present, and the entire world watching on television, clearly understood that although Pakistan was acting like a victim, it was in fact the aggressor as it was allowing terrorists to use its soil to wage a war against India.

It is clear that Prime Minister Modi has managed to convince the world that Pakistan is the epicenter of terrorism in the world and India has reorganized the state of Jammu & Kashmir to bring development there. The support for Indiaâs position across the globe proves this. But the world will be watching hard about the steps India takes next to ease the restrictions in J&K and bring about normalcy. If India manages to do it efficiently and without major confrontations, Pakistan will be under immense pressure to dismantle the terror factories on its soil.