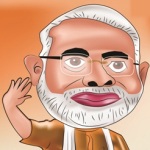 Editor-in-Chief of indiacommentary.com. Current Affairs analyst and political commentator. Writes for a number of publications. View all posts by this Author
Is the Prime Minister not able to assert himself vis-Ã -vis the Hindutva Brigade because of his past?

A small story involving Mahatma Gandhi will illustrate the point. A man once took his child to the Mahatma and after the great man blessed him, the father asked the Mahatma to tell his child to stop eating excessive sugar. Gandhiji thought for a moment and asked the father to bring back the child after a week. The following week, the same story played out. It went on for six weeks. Finally, in the seventh week, Gandhiji made the child sit on his lap, caressed him and lovingly asked him to give up eating excessive sugar. The child promised to do so. The father was perplexed. He asked the Mahatma why he made them come so many times if this was the only thing he wanted to tell the child. He could have done it the first day. Gandhiji explained that he himself was addicted to eating sugar. So he first kicked his own habit. He said that he had no moral authority to tell the child to kick a habit that he himself was addicted to.

Now when Modi expresses sadness at the current events, his words carry less weight due to his alleged misdemeanors and acts of omission and commission in the past. Even his uneasy ally, the Shiv Sena has begun taunting him for the post-Godhra riots the moment he expressed his displeasure at the Senaâs act of blackening Sudheendra Kulkarniâs face. He is not seen as a friend of the minorities. Despite his sabka saath sabka vikas line and the exhortation to both communities to jointly fight poverty instead of fighting against each other, the minorities continue to mistrust him. His cause is not helped by the misguided and anti-national activities of the Hindu extremists. The minorities feel that Modi is not using his stature to stop these attacks.

Commenting on the Dadri incident, Modi sought to create the impression that since it happened in Uttar Pradesh, the Centre had nothing to do. But he forgot that MLAs and MPs belonging to his party were, and still are, whipping up passions by making inflammatory speeches. Others, while not belonging to the party proper but seen as sympathizers, were creating mischief on the ground. Does not the Prime Minister have the moral and political authority to call all Hindu organizations to the table and drill it in their head that the historic opportunity that the Indian electorate has given the BJP to govern the country should not be frittered away by sowing seeds of hatred against the minorities?

It will be a blunder to treat these incidents as those of law and order and thereby put the onus of preventing them on the states in which they happen. Any impartial observer will deduce that there is a common thread in the attacks. They are meant to harass the minorities and make them feel unwelcome in their own country. They are designed to silence even Hindu voices of rationalism. They are designed to assert Hindu superiority. They are also designed to tell the minorities that they will no longer be appeased. In a tangential way, they are also designed to suppress the minorities so that they do not raise demands. Nothing can be more polarizing than this and if Modi does not put a stop to it immediately, he will be remembered as the Hindu prime minister rather than the statesman-like prime minister he is aspiring to be.