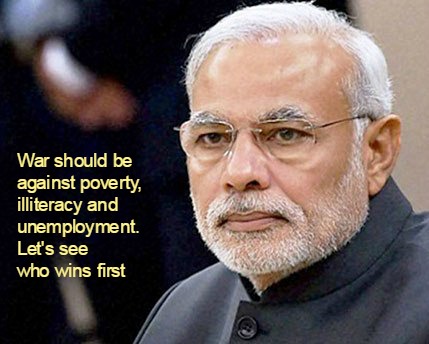 Editor-in-Chief of indiacommentary.com. Current Affairs analyst and political commentator. Writes for a number of publications. View all posts by this Author
Both in his speech in Kozhikode and his Mann Ki Baat radio address on Sunday, Prime Minister Modi has signaled to the world that India cares for its own people and the people of Pakistan too much to be drawn into a war with Pakistan. Lest it be construed as softness on Indias part, Modi also said that India will never forget the martyrdom of 18 of its soldiers in Uri and will reply befittingly. War is a very easy option  just a single order can unleash destruction both sides of the border. There will be no winners though, as the people of both countries will suffer. Prime Minister Modi made this amply clear when he directly addressed the Pakistanis and asked them to question their government on why it was ignoring multifarious problems at home and duping the people by harping on Kashmir and creating a fear psychosis by painting India in devilish colours.

The Prime Minister could have played to the galleries. He could have been hawkish. He could have whipped up war hysteria, as many in his party want him to. That would have amounted to playing into the hands of the Pakistani military establishment and the terrorists they support. That he has shown restraint is proof that he is maturing as a statesman. There are hundreds of options how India can beat Pakistan at its own game. Pakistan had used the increasing influence of Taliban in Afghanistan to leverage its geographical location and had emerged as the state the Western powers considered a bulwark against rising worldwide terrorism with its roots in the Taliban and the Haqqani network. The Western nations, led by USA, have funded Pakistan to fight this. But Pakistan has used the arms and the funds to train and fund its terror exports to India. There is growing realization in the US that Pakistan is fooling them. India has to highlight this and expose Pakistan. The attacks in Pathankot and Uri have already done that to an extent. Even China, Pakistans staunchest supporter and friend, has snubbed it recently.

Then, India has already made a start by raising the Balochistan issue. The pervasive focus on Kashmir has taken the worlds attention away from rising unrest in many provinces in Pakistan. Pakistan stands accused of massive human rights violations in Balochistan, Sindh and even Punjab. India should highlight these, along with the terror exporting angle, to isolate Pakistan in the world community.

The Prime Minister made a much needed appeal to treat Indian Muslims as our own. He also appealed that they should not be treated as vote banks. Although it sounds stupid as all Indians are our own, the first appeal was necessary to drill some sense in his own partymen and others who claim to support the BJP. They have a disconcerting habit of equating Muslims with Pakistanis. They wish to send all Indian Muslims to Pakistan. PM Modis appeal should stop these comments as they are really inflammatory. As for treating Muslims as vote banks, it is surprising that even Muslim community leaders have failed to realize that as long as they are treated as such and handed out this or that dole, they will never stand shoulder to shoulder with other Indians. Only when they will demand to be treated as Indians and not Muslims will they truly find their mojo. A majority of political parties have intentionally kept them separate from the mainstream by making Muslim-specific policies. Sabka Saath Sabka Vikas does not mean that. Policies will have to be made for all, including Muslims. The poor in both communities have suffered at the hands of wily politicians. It is now the time to look after them, irrespective of the fact whether they are Muslims or Hindu.

Instead of spending its time and money on exporting terrorism, Pakistan should earnestly take up PM Modis challenge to see who among the two countries first wins the war against poverty, illiteracy and unemployment. The people of both countries will benefit regardless of who wins first.