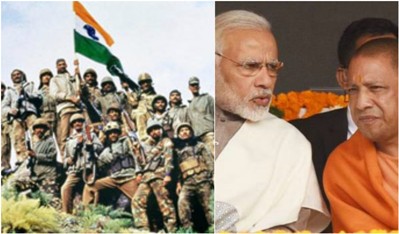 Modiji Ki Sena: Yogi And His Ilk Need To Be Silenced

Modiji Ki Sena: Yogi And His Ilk Need To Be Silenced

Editor-in-Chief of indiacommentary.com. Current Affairs analyst and political commentator. Writes for a number of publications. View all posts by this Author
So now the Indian Army is Modiji ki sena. It is not enough to have an army of trolls who subject critics of the government to vile abuse on social media. BJP leaders now want to appropriate the Indian Army to serve Modi and the party.

Really, Yogi Adityanaths remark that implies that the army is an arm of the ruling government is reprehensible and displays his feudal mentality. He wants us to believe that we are living in the age of rajas where Rana Prataps army, Shivajis army, Baburs army and Ashokas army or even Lord Rams banar sena existed. But they were a band of mercenaries or believers who fought for the cause or the ruler as he was the king and hence, supreme.

Yogi needs to be reminded that Modi is neither king nor supreme. He is an elected representative of the people, holding office at their or his partys pleasure. The Indian army is not his sena. Neither is it a band of mercenaries. It is a professional unit tasked with defending the nation, not Modi or BJP. Modi may rule for five, ten or even twenty years. But at one time he will have to go, like all rulers in a democracy. Not the Indian Army. It will continue to be there to guard the nation irrespective of whether it is Narendra Modi, Rahul Gandhi, Mamata Banerjee or Mayawati who is running the nation.

The BJP would do well to instruct its motor mouths to refrain from appropriating the army or other institutions for short term electoral gains. The Election Commission has already sought a report from the district magistrate about the exact words used by Yogi in his speech. It should apply the law strictly to set an example and prevent BJP leaders from equating everything with the party or its supremo.