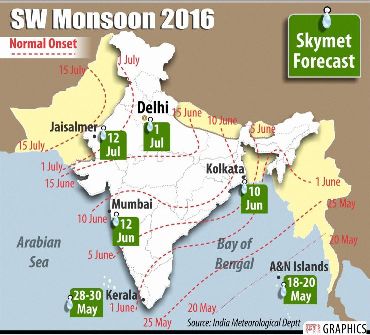 Monsoon being the backbone of the agricultural sector in the predominantly agriculture-based Indian economy, it is the key driver of the economy. After two years of sub-normal monsoon, due to the El Nino effect, the Indian farmers may have at last an occasion to cheer as the India Meteorological department (IMD) has projected above normal rainfall this year. Signs of El Nino weakening were visible from late March. According to IMD, monsoons in India, which generally last from the month of June to September, will this year see about 106% of rain as per LPA( long average period) . The average rainfall will be around 94cm compared to 89cm in 2015. This news seems to be a relief for the farmers as they can expect a bumper crop this year after two years of consecutive droughts in several areas. Agriculture, which contributes to about 16% of Indias GDP, will get a significant boost due to the current monsoon predictions and will also fuel up the growth of the economy. Agriculture has strong backward and forward links with industrial and services sectors, plus a direct bearing on rural economy and consumption, which means earnings of many companies, will improve. Backed by this, the GDP might go up a few notches to touch 8% this year.

Another big area of concern is Indias food security which has been under threat in the past two years mainly due to insufficient rainfall. Though India is experiencing growth in recent years, poverty and hunger are still widespread. It was a negative agricultural growth of -0.25 per cent in 2014-15 and 1.2 per cent in 2015-16 which impacted farm prices painfully. The country was an exporter of corn but had to import corn. India, which has the second largest population in the world after China, is also expected to be a world leader in food grain production especially as a rice and wheat producer. So a prediction of good rainfall this year, if it happens, will lead to an increase in both food production and productivity. Past mistakes in planning, coupled with weak monsoons, have resulted in the price of pulses shooting up to abnormal levels this year, causing a political uproar. The Prime Minister, in his recent speech at NITI Aayog, has asked the body to give direction to the farm policy with special emphasis on food security by anticipating requirement, stocks, crop under cultivation, monsoon predictions and need to import if required over a 15 year period.

On the other hand inflation, which is Indias biggest recurring worry, has been under control to some extent owing to tight fiscal and monetary policies and the lower oil prices, leading to both low WPI and CPI. A good monsoon and boost to agricultural growth will further contain inflation, especially food prices. Farmers will have more money in their hands and hopefully, farmer suicides will cease. Trade experts say that this will also lower the interest rate which in turn will be beneficial to our economy and its growth. RBI will also be able to lower rates of interest by about 50 percentage points, which is very heartening news for everyone. It will give a boost to all sectors of the economy. In the short term scenario India would do well in terms of reliance on local production, cut down on imports, and cushion the economy against the shocks of global economic downtrends as far as possible.

Amazing fashion. Down to earth prices. Only at Flipkart. Shop here