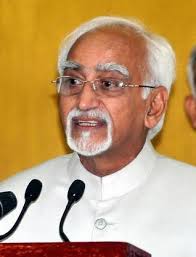 Editor-in-Chief of indiacommentary.com. Current Affairs analyst and political commentator. Writes for a number of publications. View all posts by this Author
There are a few offices in India whose dignity has to be maintained at all times. The offices of the President and Vice-President of India are two of them. Once elevated to these posts, the person holding the office is not expected to show his bias towards a particular political thought, caste, community or religion. Hence, it was surprising that a person as experienced and knowledgeable as Vice-President Hamid Ansari chose to make a speech calling for affirmative action for Muslims at the 50th anniversary session of All India Majlis-e-Mushawarat.

Apart from the constitutional impropriety of the Vice-President of the country making a speech like this, the issue of affirmative action for Muslims involves religion based reservations and can be highly damaging for a secular country like India. To be fair to Ansari, he stopped short of calling for reservations. But then, if reservation for Muslims in higher education and jobs is not the aim, there are hundreds of other areas where affirmative action for minorities (of which the Muslims are the largest group) is already in place, both at the Centre and in almost all the states. Then why did he make this call?

Apart from a separate ministry for minority affairs, there is the National Commission for Minorities to look after their welfare. Under the minority affairs ministry, several schemes are run to provide scholarships, free coaching, educational loans Ã¢â¬" both for study in India and abroad, grant-in-aid to National Minorities Development and Finance Corporation (NMDFC), skill development and leadership development. New schemes are also announced from time to time. It is not as if the minorities, including the Muslims, are left to their own ways and are not included in sabka saath, sabka vikas.

Further, there is the issue of the OBC pie of reservations being open to all minorities, including Muslims. Almost all states have notified several trades and professions and people engaged in those qualify for OBC status regardless of their religion. The list of OBCÃ¢â¬â ¢s in West Bengal, for example, has nearly 70 out of total 78 professions in category A (more backward) and 30 out of 88 professions in category B (backward) for Muslims. These Muslims then get two benefits of affirmative action Ã¢â¬" minority as well as OBC, which no Hindu can ever hope to get. A reading of the list will give the impression that it was created primarily to accord OBC status to Muslims with others added as an afterthought to avoid criticism.

It is better for India to have affirmative action based on economic status of the person, regardless of his caste, community or religion. For this to happen, all other reservations must first go. As it is, the fruits of caste based reservations are being cornered by the creamy layer. Reservations have ceased to serve the purpose for which they were introduced. On the contrary, a certain section of the society, their relatives, friends and hangers-on have prospered while the poor have only been sold dreams. Meritocracy has also suffered as we have people less intelligent than competing students getting educational seats or jobs because of the quota. Neither has the lot of the poor among the backward improved nor has the country realized its true potential by employing such people.