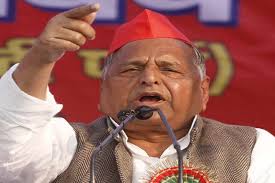 Editor-in-Chief of indiacommentary.com. Current Affairs analyst and political commentator. Writes for a number of publications. View all posts by this Author
When Mulayam Singh Yadav once again displayed his sick mind by downplaying gang rape, one thought it was his usual habit of making bizarrely sexist remarks that was to blame. One thought that age was perhaps catching up with the self-styled Ã¢â¬ËNetajiÃ¢â¬â ¢ (the original Netaji Subhash Chandra Bose must be fuming up there) and that he was going senile. But there is a bigger reason behind it after all.

It now transpires that the National Crime Records Bureau (NCRB) has, for the first time, tabulated sex crimes against women as per various types. These include rape, gang rape, stalking, sexual harassment at workplace, voyeurism and molestation in public transport. Guess which state has the dubious distinction of topping the list when it comes to gang rape. Yes, you guessed it right. ItÃ¢â¬â ¢s Uttar Pradesh (UP), where MulayamÃ¢â¬â ¢s Samajvadi Party is in power and his son Akhilesh is the chief minister. Out of a total of 2300 gang rapes that were reported in India in 2014, UP accounted for 570 or nearly 25%. The state accounted for nearly 90% or 189 custodial rapes that were reported in the country reiterating the fact that it is dangerous for a woman to be lodged in any UP jail with leering cops all around her (Figures reported in The Times of India).

Obviously, these statistics will shame even the most thick-skinned politician. The problem is that since the data is collated from police records of reported crime, Mulayam cannot even deny it. It is the UP police that have provided the data to the NCRB from their crime registers. As UP has only 16.49% of IndiaÃ¢â¬â ¢s population and just 7.32% of its land area, he cannot even say that the crime rate is comparable to its size and population. Hence, Mulayam has sought to rubbish claims regarding gang rapes and has said that it is Ã¢â¬Ånot practicalÃ¢â¬Â for such rapes to take place.

The kind of generalization Mulayam has made will now act as a signal to UP police to register gang rape cases only as a last resort. Innumerable questions will be asked of the victim Ã¢â¬" the police will act as a biased agency bent on breaking down the will of the victim. In a state like UP, it takes huge courage for a girl and her family to report a molestation case let alone a rape case. Mulayam said that gang rapes were reported when often one person raped and others stood watching, or if there were four brothers in the family and one of them raped, all four were named in the FIR. This is just stretching his imagination a bit too far. Apart from a small amount of cases involving political or personal vendetta, most gang rape cases are true.

Instead of rubbishing gang rapes and thereby degrading women, Mulayam should first instill discipline in the UP police force. He should ensure that there are women constables present in all police stations at 24 X 7. He should ensure that rapes by policemen, whether custodial or otherwise, are sternly and speedily dealt with. He should ensure that all reported cases of crimes against women are dealt with according to law and not swept under the carpet. What he is doing by making these bizarre remarks is just the opposite. He is telling the police force that gang rapes are Ã¢â¬Ånot practicalÃ¢â¬Â and they should not register them. One is sure that the next NCRB report will witness a dramatic fall in gang rapes in UP just because police stations will simply not register the crime. After all, who will cross swords with Ã¢â¬ÅNetaji.Ã¢â¬Â In a state where rapes are often display of power and gang rapes are display of extreme power, it is the responsibility of political leaders to prevent this. Sadly, no leader displays such sagacity.