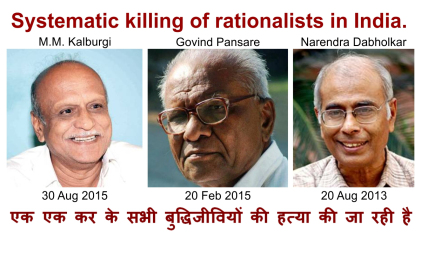 Murder Most Foul: Punish the Perpetrators

Murder Most Foul: Punish the Perpetrators

Editor-in-Chief of indiacommentary.com. Current Affairs analyst and political commentator. Writes for a number of publications. View all posts by this Author
Prof M M KalburgiÃ¢â¬â ¢s life was ended by a bullet in his home at Dharwad in Karnataka. A Kannada scholar and rationalist, Kalburgi wrote 103 books and over 400 articles and was a former vice chancellor of Kannada University. His views on religion were not acceptable to Hindu extremists. Prof Kalburgi often questioned rites and rituals that took people away from God and filled them with a sense of despair by making them fear the unknown and try to avoid misfortune through gimmicks. Since, religious gimmickry has now become big business; a certain section of the so-called protectors of the Hindu religion picked up fights with him and finally eliminated him.

Rationalism is applying logic and religion does not work on logic. I often wondered why onions and garlic were not offered to the Gods. I always thought it was due to the strong and pungent smell, till I was given a strange explanation by someone who dabbled in these matters. He told me that when onions were once offered to Lord Shiva, out of the many things on the plate, the onions fell down. Since that day people took it that Lord Shiva had rejected the onions and they stopped offering the same to all Gods. This is mythology. If you are a believer, you have to believe this. Fine.

Then, at another time, I was attending a community puja. The various Gods and Goddesses were decked with all kinds of flowers. During the course of the puja, several flowers fell down. The person conducting the rituals immediately picked each flower and gave it to a favoured bhakt saying that God has blessed him with it and he should keep it in a preferred place like his vault at home for fortune to smile on him. This is reality. If you are a bhakt, you have to accept it.

But why follow double standards for onions and flowers? Both fell, so either both were rejected by the Gods or both were given as blessings. Rationalism is that while the former fell because it got disbalanced in the heap of offerings and the latter fell because wither they were not fixed properly or due to the vibrations caused by large speakers belting out devotional songs. If you explain this to those who follow religion blindly (though it is not religion they follow per se, but religion as explained to them by their favourite guru), they will immediately brand you as a non-believer. Everyone knows a non-believer is a threat to the industry these people run.

This is what happened to Prof. Kalburgi and Narendra Dhabolkar and Govind Pansare before him. All three were perceived as a threat to the great Hindu religion for holding contrary views about mindless rituals and the stranglehold some unscrupulous persons had on simple, God fearing folks. They exposed these people for what they were Ã¢â¬" self-appointed guardians of the faith out to make a fast buck by exploiting the vulnerabilities of our poor. Their elimination was foretold.

What is disturbing is that the killers still roam free. Is it to be taken that those who commit crimes on behalf of upholding the honour of the majority have been given a free licence to kill? If the 80% majority is insecure about a handful of its own having contrary views, why blame the 18% who have many more reasons to feel insecure? If some misguided elements from the minority commit violent acts, we call them terrorists. Then what should we call them who kill people like Kalburgi, Dhabolkar and Pansare? Why is the government not serious in punishing extremists from the majority community? After all, a crime is a crime and a criminal has no religion, caste, community or any other affiliation. His is a sick mind that needs correction. The government must not show its bias by going slow on these and other crimes like the Malegaon blasts, the Samjhauta express bombings and the Mecca Masjid blasts in Hyderabad. It must act before more such killings take place.