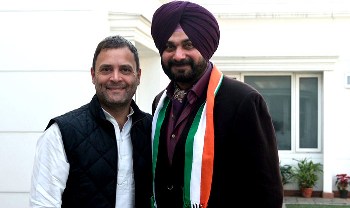 Editor-in-Chief of indiacommentary.com. Current Affairs analyst and political commentator. Writes for a number of publications. View all posts by this Author
It is becoming a regular feature of Indian politics. Turncoats are now terming changing their party as ghar wapasi or homecoming. In line with this trend, Navjot Singh Sidhu has said as much after joining the Congress. Additionally, he has claimed that he is a born Congressman. The question that begs an answer is that what was he doing in the BJP then? Serving banawas? The state of the Congress party can be gauged from the fact that a born Congressman takes 53 years to come home.

It is sad that a person who served the BJP for so many years, then flirted with Arvind Kejriwal and thought of launching his own party before joining a sinking ship like Congress makes such lofty statements. Sidhu is an opportunist of the highest rank. Since he was getting no traction in the BJP, he left the party. He negotiated hard with AAP but found Kejriwal a hard nut to crack. When he found that Kejriwal was not willing to make him the face of the party in Punjab, Sidhu lost all interest in AAP. For some time, he tested the waters to find out if he will have backers (read: moneybags and muscle power) if he floated his own party. Like a baniya, he has been scouting for the highest bidder and has found the Congress receptive to his floor price.

But it is debatable whether the Congress will give him what he wants. Although the details of the deal have not been made public, it seems that the Congress will make full use of Sidhus one-liners and sarcasm-filled speeches during campaigning and then give him some decorative post bereft of real power if it wins. For, the Congress is an old party with several high profile leaders in Punjab. To expect it to give in to the demands of a recent admittee is to expect too much. There are too many leaders, each with his or her own agenda and they will hardly yield space to Sidhu.

To speak in Sidhus own language, it seems he has been had and after the elections, his status will be that of a dhobi ka kutta, na ghar ka na ghat ka. The Congress may or may not win in Punjab. If it wins, Sidhu will get zero credit as the campaign was already in full flow, handled by the redoubtable Capt. Amrinder Singh. If it loses, Sidhus new innings will terminate before it starts. In either case, he will be the loser. Of course, then he can always go back to his television shows and claim that he was born for television.