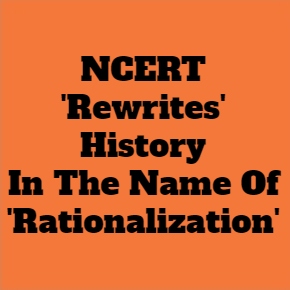 The India Commentary view View all posts by this Author

NCERT has embarked on a 'cleansing' and 'sensitizing' project, ostensibly to reduce the curriculum to give relief to the students who have fallen behind in learning due to Covid related disruptions for the last two years. It has removed paragraphs and entire chapters from several social sciences books and has attempted to rewrite or even obliterate history. That is not all. An attempt is also being made to rewrite several chapters with a biased perspective. This is not going to lessen the burden of students but keep them ignorant of several important events in Indian history or provide them with a biased version of events.

For instance, students will not learn about the Narmada Bachao Andolan or the Chipko movement. Similarly, students henceforth will not be taught about the 2002 Gujarat riots or the Emergency. They will also be given only a brief account of the Muslim rulers in India. The idea is to let future generations believe that India was always a Hindu nation comprised of several Hindu kingdoms whose rulers were powerful and benevolent. They will not be taught about the Jaichands who helped Muslim rulers consolidate their rule in the country. Neither will they know the excesses committed under the Emergency by a despotic ruler bent on prolonging her rule, for the BJP can see itself doing the same, subtly now and more openly in the near future.

Rewriting history as per the myopic or agenda-based view of the ruling dispensation does not change the history of a nation. In fact, today's rulers are not going to be there forever and if any future government reinstates the removed paragraphs and chapters, it will mean that students now in classes VI to XII will forever be unaware of these important events in Indian history. In the name of 'rationalization' what NCERT is doing is not correct. It has claimed that it has consulted outside 'experts' before taking up the exercise without disclosing their names. Such opaqueness is not good, especially in educational matters.