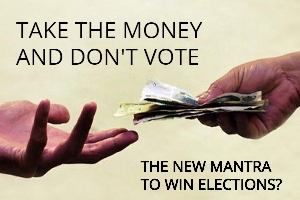 Linus tackles things head-on. He takes sides in his analysis and it fits excellently with our editorial policy. No 'maybe's' and 'allegedly' for him, only things in black and white. View all posts by this Author
Trust politicians and political managers to come up new and unique ways of trying to win elections, even if they border on the illegal. First, the ruling Trinamool Congress came up with a novel way of capturing panchayats in West Bengal by unleashing its goons on the opposition parties to prevent its candidates from filing nominations. Bengalis are football lovers. There is a saying in Bengali: fanka mathey goal (meaning scoring a goal in an empty field). The TMC wanted to score goals by eliminating the opposing team(s) altogether.

Then, it has now been reported that parties are buying voters in Karnataka  but with a difference. Usually, parties bribe voters to cast their votes in their favour. But in Karnataka, parties are paying voters to refrain from voting. In other words, voters are being asked to stay put at home on voting day and enjoy the pint of whiskey that is being given along with the money. A few Muslim voters have alleged that the BJP has approached them in this fashion. There is no law in India which says that a person has to compulsorily cast his vote. There is also no way for the Election Commission to know if the person has been bribed to refrain from voting. Since voters in particular localities will be targeted, the workers of the party can easily keep tabs on whether the bribed voters go to the booths and can even intimidate them into not going on strength of their agreement. It seems a foolproof way of winning elections by eliminating votes from persons inimical to the partys ideology. It used to happen by force in the heydays of the Left Front in West Bengal when jeep-borne and gun-toting goons used to cordon off multi-storied apartments and posh localities to intimidate voters unlikely to vote for the Communists. But it is happening for the first time in Karnataka by bribing and in an organized manner.

It is a sad reflection of the times that ideology, performance or personalities no longer count or even if they do, are not enough to win votes. Parties have to indulge in all kinds of underhand  hence illegal  activities that are driven by money and muscle power. There is an urgent need to reform electoral laws to reduce the unholy nexus of money and muscle with the election process.