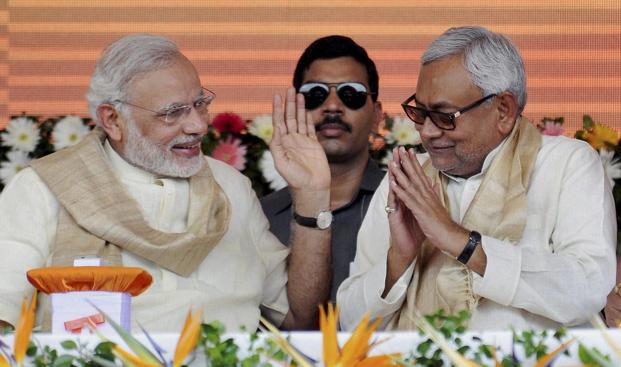 Nitish Kumar May Not Be Acceptable to All

Nitish Kumar May Not Be Acceptable to All

Editor-in-Chief of indiacommentary.com. Current Affairs analyst and political commentator. Writes for a number of publications. View all posts by this Author
The Janata Dal (United) has proposed that Nitish Kumar be made the face of opposition unity and the frontrunner to take on Narendra Modi in the 2019 general elections. The party has said that Nitish is the most credible face of inclusive growth by citing his achievements in Bihar and the fact that he got a second mandate to rule the state.

Although JD (U) is entitled to its opinion, it presupposes a lot of things in making the suggestion. The first and the obvious thing it supposes is that there will be a rainbow coalition of opposition parties to counter Narendra Modi and the BJP. In doing so, it supposes that diverse political parties, cutting across the spectrum, will be persuaded to come on a common platform. A mahagathbandhan of the sort cobbled up in Bihar is not possible on a pan-India basis for the simple reason that India is not Bihar. Bringing the Left and the Trinamool, or the AIADM and the DMK, or the SP and the BSP together is just a pipe dream. Bringing some of these parties on the same platform as the Congress is another problem. Taking just a few parties along will be meaningless as it would not serve the purpose of preventing division of opposition votes.

Then, it supposes that transcending the personal egos of most of the other leaders, Nitish Kumar could be accepted as the common prime ministerial candidate. The biggest hurdle in this will be one Rahul Gandhi. The Congress will cite its all-India infrastructure and power in a few states (although that might change in the mini elections in 2018) to claim the top spot for its heir apparent. Further, given the bad blood between Mamata Banerjee and Nitish recently, she will definitely object to his candidature. A few other leaders might also cite Kumars recent bonhomie with Modi to block him.

Instead of throwing up names in a bid to project Nitish Kumar as an all India leader, the JD (U) would do well to first start the process of talking to all the concerned parties to create the platform. They should talk about a common minimum programme, a clear cut agenda and the strategy to be developed to counter the BJP. It is mischievous on JD (U)s part to bring up the name of Nitish as the face of the opposition at such an early stage. It is most likely to be a stumbling block in achieving opposition unity.