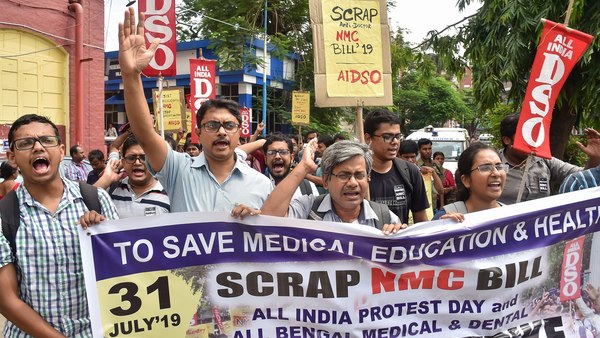 Is the National Medical Commission Bill as draconian as it is made out to be by the Indian Medical Association and other professional bodies of doctors? One feels that apart from the fact that only five members of the Commission will be elected by the medical profession (the rest being either ex-officio members or nominated by the government), the move to certify Community Health Providers (CHP) and the provision to regulate fees of only 50 percent of the seats of private medical colleges there is nothing in the Act that should raise hackles. The Bill has been passed by the Rajya Sabha with two amendments and will hence be tabled in the Lok Sabha once more before being sent to the President for his assent.

It has become fashionable nowadays for professional bodies to oppose each and everything sought to be regulated by the government in their profession. For years, the Medical Council of India (MCI), the autonomous regulatory body that was largely elected and run only by medical professionals, allowed the profession to descend into an abyss by ignoring professional misconduct and ethical malpractices by doctors while at the same time allowing medical education to fall into the hands of profit seekers who threw all standards to the winds. It is not always true that those from the profession will only be able to regulate its affairs properly. In fact, in the case of the MCI it was the opposite. But now, the loudest protests against the NMC Bill are coming from those who never raised their voices against the massive corruption in the MCI.

If the government is now proposing a structural reform of the profession by enacting a law that will establish a commission that will oversee all aspects of the profession through four boards, the medical community should welcome the move. The bill proposes to have (i) Under-Graduate Medical Education Board to set standards and regulate medical education at undergraduate level, (ii) Post-Graduate Medical Education Board to set standards and regulate medical education at postgraduate level, (iii) Medical Assessment and Rating Board for inspections and rating of medical institutions and (iv) Ethics and Medical Registration Board to regulate and promote professional conduct and medical ethics and also maintain national registers of (a) licensed medical practitioners and (b) Community Health Providers (CHPs). But the government must also think about having a smaller body (it is to have 25 members as of now) and must allow doctors to have equal representation by electing half of the members from the medical profession.

The opposition to Community Health Providers ignores two important facts. There is a huge shortage of doctors in India and hundreds of Indians die daily at the hands of quacks.  The doctor-patient ratio is even more skewed in rural India and small towns where these quacks work. While doctors talk of not getting employment, the fact is that even those with rural roots refuse to serve in the interiors of the country where their services are most required. Till such time this ratio reaches acceptable levels, is it proper to let large parts of our population remain at the mercy of these quacks? Or is it better to have CHPs, give them basic training to attend to primary and preventive cases, register and regulate them? Even the WHO recognizes the importance of people with some basic training attending to the needs of people where no trained doctors are available. But the Commission should sit with the IMA to decide the criteria for training and appointing such CHPs.

The other sore point is the proposed all-India common final-year MBBS exam which is now sought to be treated as the National Exit Test (NEXT) that will allow medical graduates to practice and the scores of which would form the basis on which seats will be allotted for Post Graduate courses under the "broad-specialty courses", while NEET will remain the entrance test for all UG courses and PG streams in the "super-specialty courses". Student doctors say that a common final-year MBBS exam or NEXT is not acceptable to them. But if they accept NEET-PG, why are they protesting against NEXT? Do they think the exam at the end of four years to grueling study and hand-on practice in hospitals is not enough to test their knowledge and readiness to take up PG courses?

The decision to regulate fees for only 50 percent of the seats in private colleges is another sore point with students. This, they say, will make medical education expensive and a preserve of the rich who can pay exorbitant fees. But medical education is an expensive proposition. If those setting up medical colleges do not make reasonable profits, they will resort to unhealthy practices like the ones prevalent (licenses were issued to colleges that lacked infrastructure and faculty and they hired ghost faculty and patients during inspections, among other things) when the MCI was regulating the colleges. This is not to say that the colleges should be allowed to charge what they feel like for that will take such education beyond the reach of most middle-class students, but there must be a middle ground that addresses the concerns of both the students and the colleges. The long term solution lies in increasing the number of seats, either in existing colleges or by allowing new ones. The NMC will have to look into this.