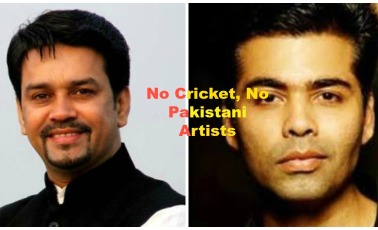 No Cricket With Pakistan and No Pakistani Artists in India

No Cricket With Pakistan and No Pakistani Artists in India

Editor-in-Chief of indiacommentary.com. Current Affairs analyst and political commentator. Writes for a number of publications. View all posts by this Author
BCCI chief Anurag Thakur is right and noted filmmaker Karan Johar is not. Thakur has said that there is no question of India playing cricket with Pakistan in any kind of bilateral series in the current situation. His remarks have raised a lot of stink in Pakistan where former players and cricket administrators have said that Thakur was running the BCCI more like a politician than an administrator. They have said that politics and sports should not be mixed.

These are old responses which have begun to sound like stuck gramophone records. Pakistan does not think twice before breeding, financing, arming, training then letting terrorists lose on Indian territory to cause extreme damage to life and property in our country. They live in a state of perpetual denial and call them non-state actors. They refuse to act on the proof we supply. They give asylum to a notorious criminal from India and he continues with his nefarious activities from Pakistan. They deny his existence. The terrorists they send kill our soldiers and they still want us to play cricket with them. It will be an insult to the martyrdom of our valiant jawans on the one hand and will break the spirit of the men on the border on the other if Indian and Pakistani players were to indulge in on-field bonhomie while our soldiers face bullets  both at the LoC and from Pakistan-backed terrorists.

Karan Johar asks whether banning Pakistani talent will stop terrorism. My question to him is: has using Pakistani talent stopped terrorism? Bollywood has been quite friendly to Pakistani artists. Actors, musicians, singers et al have been accepted with open arms and have been provided work in our movies. That they have achieved a good degree of fame is proof that Indians are not biased and reward good work. I am myself a huge fan of Rahat Fateh Ali Khan. But if the country which they belong to continues to indulge in a proxy war with India, perhaps the time has come to send them back. For their government and the terror groups supported by them do not understand our magnanimity and urge for friendship, brotherhood and people to people contact. Since using Pakistani talent has not stopped terrorism, lets give the ban a try. Let the people of Pakistan realize that Indians are not biased, they honoured artists from their country. But LoC violations, support for separatists in Kashmir, Pathankot, Uri and Pakistani artistes working in India cannot go together. Our magnanimity cannot, and should not, be construed as softness.