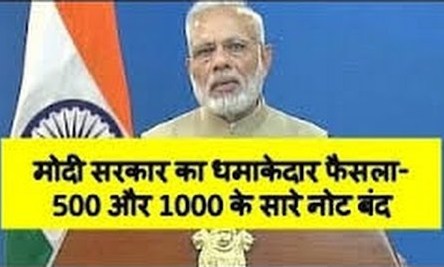 No Public Support For Opposition Parties Against Notebandi

No Public Support For Opposition Parties Against Notebandi

Holding an extreme view and carting the ball out of the park is what interests him most. He is a hard hitter at all times. Fasten your seatbelts and read. View all posts by this Author
In the age of instant coffee and instant noodles, the opposition parties in India are looking for instant benefits from notebandi. This is a childish wish and only shows their thought bankruptcy in fighting the move politically. All they have to show for their efforts is a wasted parliamentary session till now. Most parties are trying to fool the people by saying that Modi is trying to fool them. By highlighting the comments of ex-PM Manmohan Singh or economists such as Amartya Sen and Jean Dreze, what is the opposition trying to prove? How can a Congressman who preceded Modi as PM going to support something that is going to wash away all gains his partymen made by indulging in numerous multi-billion rupee scams during his regime? Arent Sen and Dreze Left oriented? So will they support anything that Modi does?

If notebandi is so bad and has so inconvenienced people, then why has there been no popular revolt despite the constant egging on by the opposition parties? It seems the netas are more inconvenienced than the people and by constantly deriding Modi and notebandi, the opposition is making wags say that they are complaining since their money is going to go down the drain. The people are willing to take all short term and temporary inconveniences and miseries in their stride as they know that despite the false propaganda by the opposition, Modi has at least started the fight against illegality in businesses and professions, corruption and black money.

When people read of daily raids against real estate tycoons, gold dealers, hawala operators and professionals, among others, that are yielding huge sums of ill-gotten wealth, they know that this fight is going to be fought on a much larger scale. They know that notebandi is just the first, and a hugely necessary and important, step in that fight. They know that Modi is working to a plan and has many more tricks lined up. They know that he is going for the jugular and will not leave any stone unturned.

For many years, the people have been told by the same opposition parties that the BJP is a Hindu oriented party that is backed by small traders. Lately, they have also been told that Modis government is a suit-boot ki sarkar that caters to the big businessmen like Ambani and Adani. The people are now asking that if this is so, then why Modi has shot himself in the foot by alienating the same class of people who have been his staunchest supporters. The opposition thinks that there is an anti-Modi wave in the country post demonetization. But they are jumping the gun. The war is not over now. Notebandi was a battle that opened just one front. There are many more fronts and many battles are going to be fought post December 30. Once Modi is done, the opposition will be stunned into silence. For this is a war Modi will win  and till now the people are supporting him.