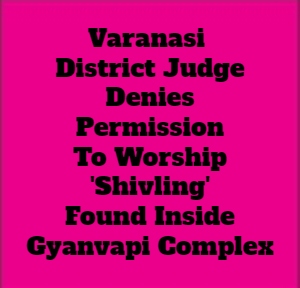 A 'shivling' was allegedly found when the water was drained out of a pond in the Gynavapi complex during the court-ordered and videographed survey of the same. The images that went viral could not conclusively prove that it was a 'shivling'. The Muslim side insisted that it was a fountain. The courts are yet to examine the 'shivling' and have not issued any orders regarding the same.

But a seer, Swami Avimukteshawaranand, jumped the gun and filed a plea before the Varanasi district judge (who is now hearing the entire Gyanvapi matter under the express direction of the Supreme Court) for orders to permit worshipping of the shivling. The court has rightly rejected the plea on the grounds that it was "not maintainable" at this stage.

There are several things to be considered in the matter. First and foremost, since the original case about the legality of the survey of the Gyanvapi complex ordered by a different court in Varanasi is still being heard, anything unrelated to the same needs to wait. Then, since it has not yet been legally established that what was discovered inside the pond is actually a shivling, the question of worshipping it does not arise at this stage. Finally, since the court is also hearing the plea that whether Hindus should be granted right of worship to 'visible and invisible deities' inside the complex, no exception can be made on an urgent basis in the case of the recently discovered 'shivling'.

Since the Varanasi district judge is hearing the petitions already filed in the matter, it will be better for all concerned to refrain from complicating matters by filing fresh petitions on issues unrelated to the matter at hand. If the court thinks it fit to grant Hindus the right to worship the 'visible and invisible deities' inside the Gyanvapi complex, the right to worship the 'shivling' will obviously be an integral part of that order. Hence, litigants and others must help the court in deciding the matter at hand by providing evidence or raising points of law and not make matters worse by filing frivolous pleas.