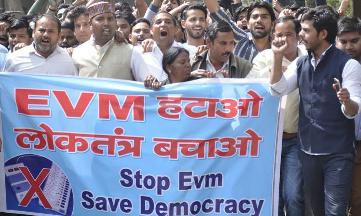 Now, EVMs Are the Culprits for BJP's Popularity

Now, EVMs Are the Culprits for BJP's Popularity

Editor-in-Chief of indiacommentary.com. Current Affairs analyst and political commentator. Writes for a number of publications. View all posts by this Author
First it was Mayawati who alleged that the EVMs were doctored to facilitate the BJP win in UP. Now both Arvind Kejriwal and Ajay Maken are against EVMs being used in the New Delhi Municipal Corporation (NDMC) elections. In between, some small frys in Punjab also made some noises about paper trails not matching the number of votes recorded in EVMs. Isnt this a direct assault on the independence and integrity of the Election Commission? Why cant some politicians in India digest the fact that the people have rejected them? Why do they always try look for excuses for their failures?

It is impossible to doctor EVMs on the scale that is being alleged. There is a possibility that some EVMs can be doctored by a group of bribed or brainwashed officials, but getting all or most of the EVMs across the state doctored is something that cannot be even thought of, let alone carried out. It will involve a lot of people and the chances of leaks, especially with the ever vigilant media breathing down the neck, will deter any government or political party from taking the risk.

Further, with the election process the sole domain of the Election Commission (EC), an autonomous Constitutional body with enormous powers, tampering with EVMs on an institutionalized basis is just not possible. The EC does not, and has not been found, to play favourites. Although the EC has said that the EVMs in India are perfect and infallible, apart from studies it has commissioned itself, it has not allowed outside experts to verify the fact. Hence, some experts have questioned the infallibility. But none of them have said or proved that all of Indias nearly 1.5 million can be so doctored as part of a conspiracy.

Kejriwal and Maken are demanding that paper ballots be used for the NDMC elections. Do we want to go back in time? The answer to fallibility of technology is not to revert to outdated processes but to apply advanced technology and/or common sense to rectify the fault. The EC conducts random checks on EVMs before any election to verify their working conditions. These checks follow several guidelines which check on buttons, hardware and software. Representatives of political parties can be made a part of this exercise so that they can satisfy themselves on the working of the EVMs being used in any election.

Lastly, Kejriwal did not gripe when he swept the Delhi elections with the same EVMs. His crusade was at its height then and the losing BJP could have easily alleged that he had radicalized security agencies to allow software engineers in strong rooms to tamper with the EVMs. Similarly, no one is alleging that the EVMs in Punjab were doctored. If doctoring voting machines was the sole preserve of the ruling combine, the SAD-BJP combine could have easily done so in Punjab. The people of a state know who they have voted for. The people of UP and Uttarakhand voted for the BJP and the people of Punjab voted for the Congress. Hence they are not surprised or outraged at the results. If EVMs were tampered with on a large scale to return a result radically different from the voting preferences of the people, there would be a popular uprising, without any instigation from vested interests. The current allegation by Mayawati just shows how she is unable to accept defeat gracefully. The demand for paper ballots by Kejriwal and Maken, on the other hand, shows that they follow double standards  EVMs are good when they throw up results in their favour and bad when they do not.