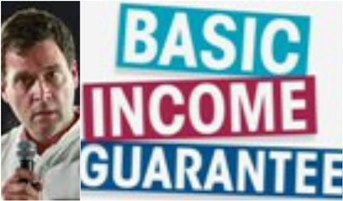 Editor-in-Chief of indiacommentary.com. Current Affairs analyst and political commentator. Writes for a number of publications. View all posts by this Author
Rahul Gandhi has announced a basic income scheme for the poorest families of the country (made of 20% of the population) earning less than Rs 12000 per month. He has announced that they will be paid a dole of Rs 6000 per month if the UPA is voted to power. The money is to be directly transferred to the bank account of the beneficiaries. He said that 5 crore families are expected to be covered under the scheme which has been christened Nyuntam Aay Yojana (NYAY). It translates to Rs 30000cr per month or Rs 3.6 lakh cr per year. Gandhi said that he had consulted the best of economists (without naming them, of course) and they have all backed the scheme. He added that they have been working on it for four-five months and it is an extremely powerful, dynamic, well-thought-through idea. Rather dramatically, the Gandhi scion called the scheme the final assault on poverty.

Economists the world over have been talking about universal basic income and helicopter money for the last few years. The basic premise the idea rests on is that if the poor are provided money for free, they will spend it and raise the demand for goods and services. If the poorest are provided money without any strings attached, they will obviously not spend it on buying gadgets but on buying daily necessities. Although it would ensure that they do not go to sleep on empty stomachs, it also has the potential of fanning food inflation for low-end staples (particularly for items that are consumed by the poorest families), something that will immediately reduce the real value of the dole over a very short period of time. If the poor buy rice at Rs 25 per kg now, with Rs 30000cr of dole money chasing more rice (and other staples), the price of low-quality rice will jump and they would, in fact, get less rice for the same money.

It also shows the bankruptcy of ideas in the Congress that despite Rahul Gandhi berating the NDA government day in and day out over the paucity of jobs, he has never said what the Congress plans to do about job creation if it comes to power. Rahul Gandhi has become a champion in discovering alleged shortcomings of ruling parties, at the Centre or in states whose chief ministers have not joined the UPA alliance, but stops short of telling the people how he is going to change the situation for the better. Instead of talking about making the poor self-sufficient by giving them work, Rahuls formula is to provide them money for free and make them dependent and probably, lazy. Even if we agree that before work is available and the poor can earn for themselves, they need to be provided succor from the pangs of hunger and hence deserve the dole, where is the Rs 3.6 lakh crore going to come from? If the scheme is implemented by reducing or doing away with food subsidies, it would be like giving with one hand and taking away with the other and hence would be a meaningless rejig that would deceive the people. As usual, Rahul Gandhi did not provide the answers.