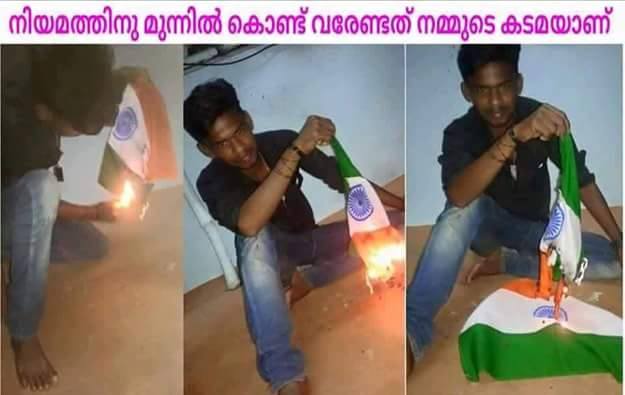 Only a Demented Mind Can Do This

Only a Demented Mind Can Do This

Editor-in-Chief of indiacommentary.com. Current Affairs analyst and political commentator. Writes for a number of publications. View all posts by this Author
The picture reproduced above can only be the work of a demented mind and can make the blood of all Indians boil with rage. For, who in their right mind would show such disrespect to the national flag?

India has a comprehensive law, Prevention of Insults to National Honour Act, 1971 (as amended in 2005) that deals with such offences. The relevant sections are reproduced here for public awareness :

INSULT TO INDIAN NATIONAL FLAG AND CONSTITUTION OF INDIA

Whoever in any public place or in any other place within public view burns, mutilates, defaces, defiles, disfigures, destroys, tramples upon or otherwise shows disrespect to or brings into contempt (whether by words, either spoken or written, or by acts) the Indian National Flag or the Constitution of India or any part thereof, shall be punished with imprisonment for a term which may extend to three years, or with fine, or with both.

Explanation 3 â The expression âpublic placeâ means any place intended for use by, or accessible to, the public and includes any public conveyance.

PREVENTION OF SINGING OF NATIONAL ANTHEM

Whoever intentionally prevents the singing of the Indian National Anthem or causes disturbances to any assembly engaged in such singing shall be punished with imprisonment for a term, which may extend to three years, or with fine, or with both.

Whoever having already been convicted of an offence under section 2 or section 3 is again convicted of any such offence shall be punishable for the second and for every subsequent offence, with imprisonment for a term, which shall not be less than one year.

The Chennai police have arrested the man in the picture and the law will take its own course.

It needs to be pointed out that the act does not consider remaining seated or otherwise showing disrespect when the National Anthem is being sung as an offence. There was a controversy recently in Mumbai when a family that remained seated when the Anthem flashed on the screen in a movie hall was heckled and asked to leave the hall.

Also, the act does not say that using the strains of the National Anthem in any kind of commercial venture, signature tune or a song is disrespectful.

These two anomalies should be addressed. Standing to show respect when the National Anthem is being sung should be made compulsory and commercial exploitation of its musical notes or lyrics should be prohibited.

Finally, the penalty for second or subsequent offence is too low. A second offence should make the person lose all facilities he enjoys being an Indian, like subsidies or exemptions in Income Tax and make him ineligible for government jobs, contracts or bank loans, while subsequent offences should entail cancellation of the passport for 10 years and enhanced jail terms.