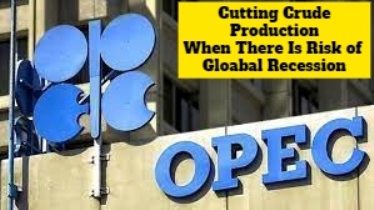 OPEC's Move Will Lead To Difficulties For India

OPEC's Move Will Lead To Difficulties For India

As the US Fed tightens policy rates and the dollar gains against most currencies in the world, India's foreign exchange reserves dip and inflation shows little sign of easing as the festive season shopping has created renewed demand for product and services, comes the bad news that the Organization of Petroleum Exporting Countries (OPEC) and its allies will cut production by 2 million barrels a day in order to shore up falling prices. This means that global oil supply will reduce by 2%. Statements by OPEC officials suggest that the organization wants the price to rule at $90 per barrel from the $82 per barrel they were ruling in the last week of September after seeing highs of over $100 per barrel in June. The US media has termed OPEC's move as a failure of President Joe Biden's so-called fist-bump diplomacy with the Saudis and highlights the difficulty the US will face in managing the economy in times of a global recession risk as crude prices remain elevated.

For India, especially, this is extremely bad news. The country imports more than 80 percent of its requirement and is under immense pressure as the rupee is falling to new lows against the dollar. Further, inflation is still very high. If India's crude basket once again rises to over $100 per barrel, there will be a cascading effect on prices will be upwardly revised and the chances of runaway inflation will loom large. India's crude import bill had been declining after June mainly due to lower prices and discounted imports from Russia. But Russian imports are a small percentage of the total requirement and if prices rise beyond $90 per barrel, as they did after the OPEC announcement, India will feel the pinch as there will be huge pressure on the current account deficit.

Although reports suggest that the US will ease sanctions on Venezuela and allow it to export oil to the US and European markets, that will not be enough to cool global crude prices. With prices expected to prevail over $90 per barrel in the medium term, India will have to battle inflationary pressures and the RBI will have to keep raising key interest rates. That, of course, will have an adverse effect on growth.