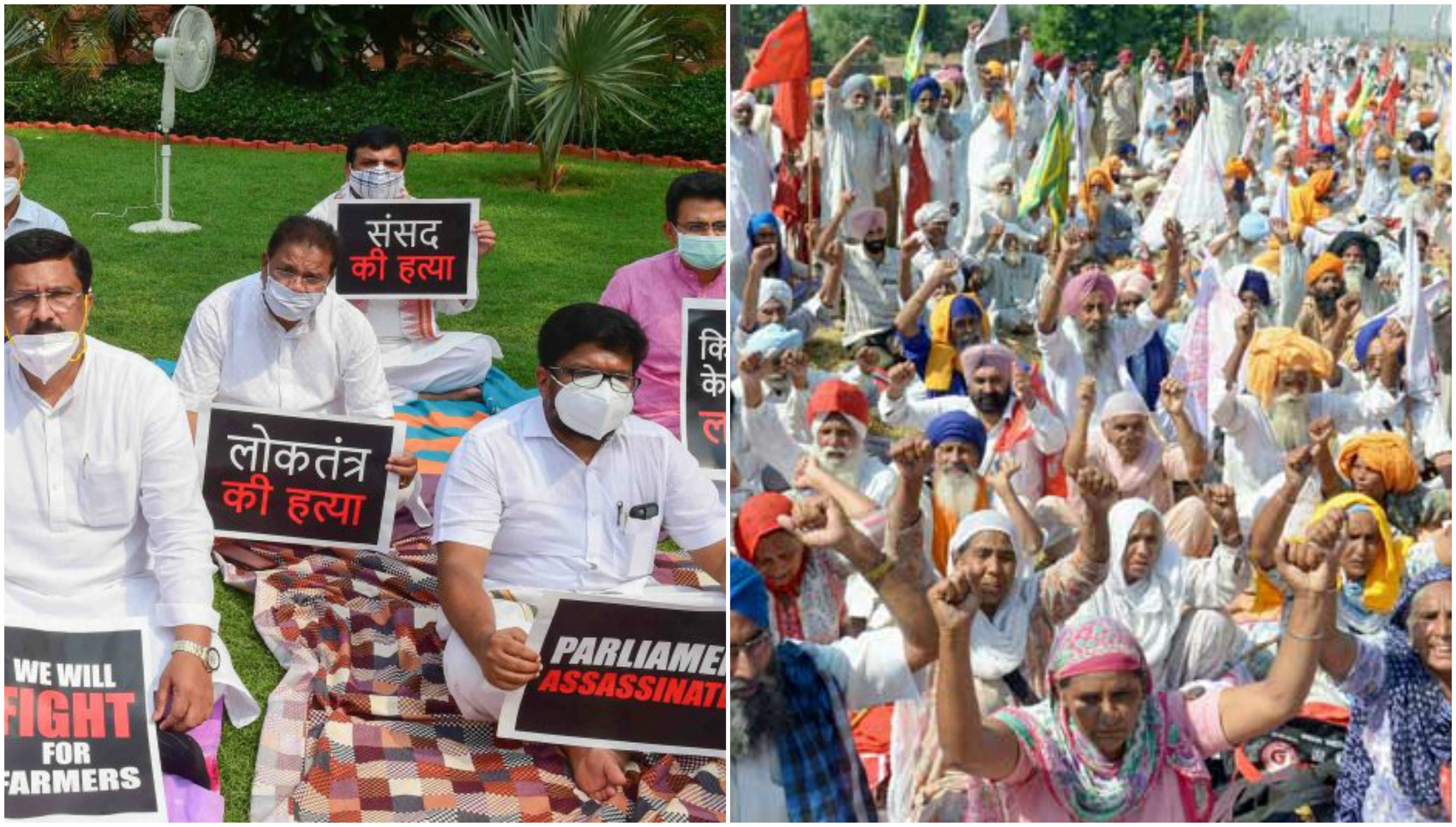 Opposition Furore Over Farm Bills: Is It Too Late Now?

Opposition Furore Over Farm Bills: Is It Too Late Now?

Some opposition MP's created a ruckus in the Rajya Sabha and they were promptly suspended for the rest of the term of the monsoon session of parliament. The eight who were suspended were - Trinamool Congress's Derek O'Brien and Dola Sen, Aam Aadmi Party's Sanjay singh, Congress's Rajeev Satav, Syed Nasir Hussan and Ripun Bora and CPM's KK Ragesh and Elamaram Kareem. They sat on an indefinite dharna outside parliament. On the other hand, deputy chairman Harivansh went on a 24-hour fast. The government said that it will revoke the suspension if the MP's apologized. But the opposition called it "a murder of democracy" by a "fascist" government. The Congress and some other parties have decided to start a nation-wide agitation against the farm bills and in support of the farmers. They have already called the hike in the MSP price of rabi crops an eyewash and a joke on the farmers as very soon there will be no MSP.

Prime Minister Modi, on the other hand, has said that by providing the farmers another channel of selling their produce, in addition to selling on MSP through the APMC mandis, the government is trying to free them from the clutches of the middlemen. The government also said that the three farm bills would ensure that Indian agriculture moves away from subsistence level farming and people invest in farms to enjoy the fruits of liberalization and reforms. It said that the farmer has been empowered to sell his produce outside the mandis as he will get a better price according to demand, which the mandis do not allow as the price there is often manipulated to benefit traders at the cost of the farmers. That the middlemen will be hard hit was proved today when they joined the agitation in Punjab and Haryana, ostensibly to save their livelihood but in reality to perpetuate the monopoly of the APMC mandis.

The BJP also tried to blow up the issue into one of "Bihari pride" as Harivansh, the deputy chairman of Rajya Sabha who was in the chair when the bedlam took place, is from Bihar and the state is scheduled to go to the polls shortly. The BJP is now saying that the assault on Harivansh was an assault on Bihar and its people. It will now try to milk it during the polls.

Since the ordinances on which the farm bills have been based were first issued in June this year, why the opposition parties did not take up the matter immediately after they were issued? Some farmers had protested against the ordinances in July in Punjab and Haryana but the opposition failed to convert it into a movement. Also, if the government thinks that the bills will benefit the farmers, why did it not reach out to them and explain the benefits?

One thinks that more than the interests of the farmers what is at stake here is the alleged assault on the federal structure and loss of revenue for the states, along with the dismantling of the middlemen mafia. Since agriculture is a state subject and since the farm bills seek to override the APMC Acts of the states, the opposition-ruled states think that the Centre is trying to bulldoze them. But it needs to be repeated, the opposition to the legislation should have started from the ordinance stage. Now, it is too late. The Punjab government has decided to approach the courts against the bills. If the courts do not find them unconstitutional, there is little the opposition can do as the past six years have shown that it is incapable of starting and sustaining any meaningful people's movement against the NDA despite blunders like demonetization.