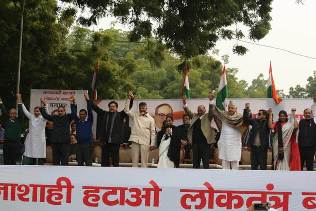 Opposition Parties: Will They Get Their Act Together?

Opposition Parties: Will They Get Their Act Together?

Editor-in-Chief of indiacommentary.com. Current Affairs analyst and political commentator. Writes for a number of publications. View all posts by this Author
After the AAP-organized rally of opposition parties in Delhi, despite the bravado and the talk of a common minimum programme, instead of barriers being broken, more differences have come out in the open. Although the rally was better attended than the one in Kolkata (with even the Left putting in an appearance), the way leaders of different parties avoided each other spoke volumes about the future of the alliance. For instance, despite being in Delhi since the morning, Mamata Banerjee made sure she came on the dais only after all the Left leaders had gone. She said AAP was willing to ally with the Congress but later in the evening, spokesmen for the Delhi outfit clearly hinted that Congress had all but refused an alliance.

With the opposition trying to come together and form an alliance to take on the might of the BJP, it was but natural that leaders from that party would try and show the contradictions inherent in any such alliance. Prime Minister Modi has termed it as mahamilavat. If the opposition parties keep on spurning each other, it will provide further opportunity to the BJP to trash the alliance. Hence, it is necessary for the opposition to get its act together fast. The review of the draft common minimum programme (CMP) in four weeks from now provides an excellent opportunity (and probably the last chance) for them to shed their respective egos and unite with a purpose.

It is now clear from the recent maneuvers of the Congress party that it has taken the SP-BSP alliance in UP as a big slight. It has inducted Priyanka Gandhi in the fray and has decided to go all out in the state. With the stakes being the highest in the largest state in India, this does not spell well for opposition unity. Then, despite Rahul Gandhi voicing support for Mamata Banerjee in her stand-off with the Centre over the CBI raid in Kolkata, the local leaders of West Bengal Congress have been critical of the TMC boss over the chit funds scam in the state and Mamata has let her displeasure be known in no uncertain terms. Further, the question of who will lead the alliance remains unanswered.

Still, when these leaders meet to review the CMP, they will have a huge opportunity to resolve all issues and present a united front before those voters who are looking for an alternative to the BJP. As the largest all-India party in the proposed alliance, the Congress will have to take the lead in addressing the concerns of the smaller parties and bring them on board. For instance, in MP, Rajasthan and Chhattisgarh, although the Congress is the dominant party, it needs to bring BSP (which gets anywhere between 3 to 5% of the popular votes in these states) on board to maximize the returns. Three-cornered fights must be avoided wherever possible if the alliance wishes to make a difference. For this to happen, consultations must start now and a culmination must be reached in four weeks. Any delay will be suicidal.